CNN's John King double-checks the accuracy of some of the candidates' statements during Tuesday's presidential debate.

Men from an Amish breakaway group have been arrested on federal hate crime charges for attacking another Amish community. Gary Tuchman investigates.

Editor's note: Three weeks ago AC360's Gary Tuchman reported on the beard-cutting attacks in an Ohio Amish community. Tonight, he'll cover the latest news with details of the charges brought against seven men in a breakaway Amish group.

(CNN) - Seven members of a breakaway Amish group in eastern Ohio were arrested on federal hate crime charges for allegedly shaving the beards and cutting the hair of individuals who refused to support their leader, according to a criminal complaint released Wednesday.

One of the seven men is Samuel Mullet Sr., the leader of the breakaway sect and a man that local law enforcement and other Amish in the area consider a cult leader.

Mullet ruled the group with an iron fist, in some cases "forcing members to sleep for days at a time in a chicken coop" and beating those "who appear to disobey" him, according to an FBI affidavit.

Mullet had been "counseling" married women in his sect, "taking them into his home so that he may cleanse them of the devil with acts of sexual intimacy," the sworn statement from an FBI agent said.

Editor's note: Tune in at 8 p.m. ET for the latest on the clashes  from Ben Wedeman who's on the ground in Egypt.

Cairo (CNN) - Military police poured into Cairo's Tahrir Square on Wednesday in hopes of stopping clashes between protesters and police, as the Egyptian government said a truce had been declared through a group of clerics.

The truce lasted about three hours.

But after a period of calm, some protesters began throwing rocks at soldiers. Riot police responded with tear gas; the unrest continued late Wednesday.

Some army soldiers tried to stop security forces from shooting tear gas, but they were outnumbered.

On state-run TV, the government said religious scholars were on their way "to form a human shield between the protesters and the security forces." 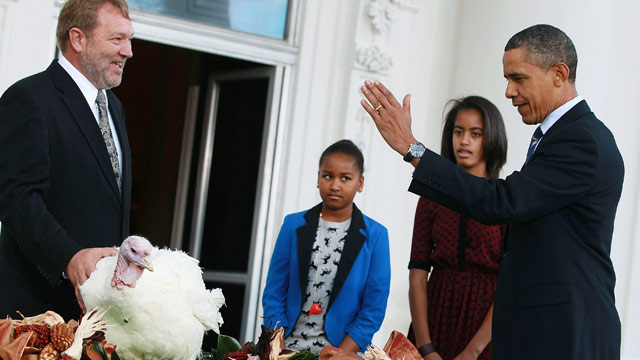 Ready for today's Beat 360°? Everyday we post a picture, and you provide the caption. Our staff will join in, too. Tune in tonight at 8 p.m. to see if yours is our favorite!

“Daaaaaaaaaad, can we go over to Occupy later?”
Sam

"Liberty" may get the pardon, but those other turkeys on the super committee should 'get the axe."
Bridget

Reporter's Note: The president is, like many of us, preparing for Thanksgiving.

Do you think anyone is really working today? I feel as if the Wednesday before Thanksgiving can be so overwhelmed by preparations for the big feast and dealing with travel arrangements that it has turned into a de facto extension of the holiday itself.

I know that plenty of schools hold only a half day of classes, and not much gets done in those few hours the students are there anyway. Plenty of offices seem pretty much OK with people ducking out a shade early. And I’ve noticed more stores closing around mid-afternoon than I used to see.

Not that I’m complaining. Frankly, I’m all in favor of more holidays in this country.

That may seem counterintuitive. After all, our economy is shakier than a gobbler when Grandma starts whipping up gravy, but I don’t think it is because we’re not spending enough time at the office. To the contrary, I think that many people are so nervous about losing their jobs that they are spending way too much time on the job. They are at their desks too much; they worry about work when they are away; and with cell phones and BlackBerrys…well, to be honest, many people are never really “off” anymore, are they?

The long hours are making them tired, uninspired, and I would argue less productive overall.

So if your staff wants to step out a little earlier today, despite all the complaints about government workers that you must hear from time to time, I say “Let them go.” Maybe with a little extra time to enjoy their families, consider the goodness of their lives, and gain a little perspective, they will actually do a better job for all of us when they return.

And then we’ll all have something else for which to be thankful.

CNN anchors and analysts give their take on the CNN National Security Debate during the AC360° post-debate show.