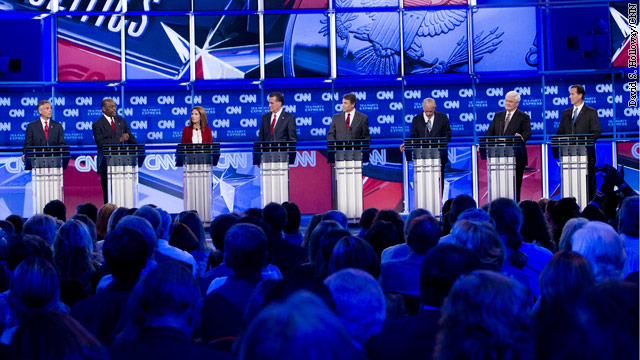 Much to gain and lose in CNN national security debate

Washington (CNN) - The Republican presidential candidates face off Tuesday night just a few blocks from the place they all hope to call home: the White House.

The candidates share the stage at DAR Constitution Hall, just down the street from 1600 Pennsylvania Avenue. CNN is teaming up with leading Republican-leaning think tanks Heritage Foundation and American Enterprise Institute to host a debate that focuses heavily on national security and foreign policy issues, but which will also include top economic concerns, including the failure of the congressional super committee to find agreement to cut $1.2 trillion from the country's long-term debt.

The debate is the 11th major showdown between the Republican candidates and the first in 10 days.

It's also the first in which former House Speaker Newt Gingrich is firmly among the front-runners in national surveys, deadlocked with former Massachusetts Gov. Mitt Romney for the top spot in the nomination race.