Mike McQueary, who was a graduate assistant in 2002 and later became a full-time coach, is the latest casualty in a scandal that has included the arrest of the man he allegedly witnessed assault the boy, riots in State College and the ouster of Paterno and the university's president.

McQueary in recent months told a grand jury that he saw Jerry Sandusky, now 67, sexually assault a boy at the campus's football complex in 2002. He said he had reported the incident to Paterno, who in turn alerted Athletic Director Timothy Curley, Pennsylvania Attorney General Linda Kelly said earlier this week.

Letters to the President #1026: 'The newest veterans'

Reporter's Note: This is Veterans Day, and the president marked it with a traditional visit to Arlington. I mark it with my daily letter to the White House.

We should make no mistake about this: They fought these wars alone. For all of our talk about the shared struggle of our nation as we have slogged through the years in Iraq and Afghanistan, most of us felt no impact whatsoever. Our troops went, fought, and now are coming home alone.

We still went to the malls, walked our dogs, went out for sushi, and bought caramel lattes. We enjoyed soccer games with our kids, saw hit movies, and read the latest books.

We did not conserve gasoline, or ration sugar, or save tinfoil, or plant victory gardens. Most of the time, most of us, I would wager, forgot that our nation was even fighting.

Our disconnection from the ugly reality has been so complete that unless a visitor to our nation just knew we were at war, there was precious little to tell him so.

Does that matter? In a way, I suppose not. After all, technology has changed the way we wage war. For most conflicts, it appears we will no longer need those countless oceans of fighters that characterized the World Wars. So, whereas in the 1940’s almost everyone knew someone directly involved in the fighting and had to take part in air raid drills, or steel drives, or the like; now, that is just not the case.

But this should not be forgotten: The people who go to battle under the American flag still face real bullets, real bombs, and though they represent a much smaller percentage of our population than they once did, they still deserve real honor and respect from the rest of us. They have earned our help in finding jobs as they return home, and our support as they try to adjust to the peaceful life that the rest of us have enjoyed all along.

When we say the word “veteran,” I think a lot of us picture an old man in a VFW parade waving a small flag, and saluting during the national anthem. But we are surrounded by much younger veterans now, and on this Veterans Day they ought to be remembered and thanked...even if we barely noticed when they were gone. 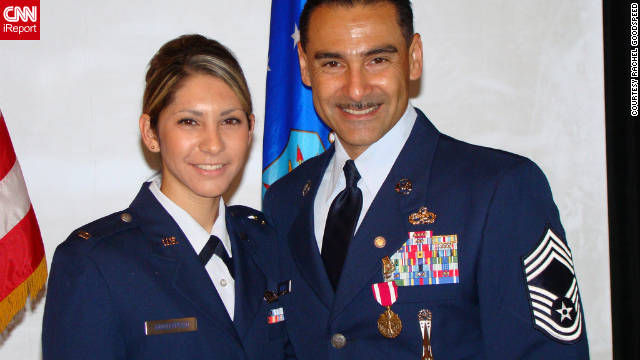 Rachel Goodspeed posted a tribute to all of her family members who have served in the U.S. military, including her grandfather, father, husband, brother and herself. Her father, who spent thirty years in the Air Force, was a big influence in her decision to join the military.
November 11th, 2011
09:36 AM ET

(CNN) - Veterans Day is dedicated to honoring our military servicemen and servicewomen, many of whom continue to risk their lives for the lives of millions. The efforts of these heroes and the sacrifices they make deserve our respect and gratitude.

This year for Veterans Day, CNN iReport partnered with Facebook to salute veterans in a new way. Facebook users uploaded pictures of veterans they wanted to recognize for their service and tagged "CNN iReport" in the photo for it to appear on iReport's Facebook page. We invited some of the best submitters to upload their photos to iReport in our Honor a veteran assignment. Those submissions that originated on Facebook received a "Submitted via Facebook" bug in the producer's note of the iReport.

We received tributes honoring veterans across all branches of the U.S. military, and even one from the Canadian Navy.

Anderson Cooper reports on who allegedly knew that Jerry Sandusky was raping and abusing children and when.