Anderson Cooper examines the nuances of a former housekeeper willing to hold onto one of John Lennon's teeth.

Anderson Cooper and Isha Sesay dish about the playful relationship between dogs and New York police horses in "The Shot."

Penn State is rocked by charges against a former coach and resignations by two administrators. Jason Carroll reports.

GOP presidential candidate Herman Cain faced a new claim of sexually inappropriate behavior Monday as a Chicago woman, Sharon Bialek, told reporters the former head of the National Restaurant Association groped her after a dinner together in 1997.

Editor's note: Tune in to AC360° at 8 p.m. ET tonight for in-depth analysis on the Conrad Murray verdict.

Los Angeles (CNN) - When Michael Jackson died unexpectedly two years ago, his fans worldwide erupted in a torrent of grief, anguish and - in tribute to the pop icon - song and dance.

On Monday, there were hugs, tears and shrieks of joy among his fans packed outside a Southern California courtroom after a jury found Jackson's physician, Conrad Murray, guilty of involuntary manslaughter in the singer's death.

"Oh my God, guilty!" one woman yelled out, seconds after the verdict was announced.

Others appeared to almost break out in song; some seemed to start dancing; and a chant soon rose up of "Justice, justice, justice."

Letters to the President #1022: 'Ignoring the pop news buzz'

Reporter's Note: I write to President Obama every day. If he reads any of my letters, it must be one of those state secrets we’re always hearing about, because I have no clue if he’s even seen them. And yet, I press on.

Lots of news out here today: A guilty verdict in the trial of Michael Jackson’s doctor, more accusations against Herman Cain, and that sexual impropriety storm that is devouring Penn State. And you know what that means? This is a great day for you to practice not being distracted.

Think about it. Millions of Americans are caught up in these stories right now; hanging on each little detail, each new development, devouring quotes from the principals like waffles at breakfast. They are reading the affidavits online, streaming the video on their smart phones, and discussing it over lunch at Chili’s.

And of course, they can afford to. We regular folks can spend hours drowning in this kind of thing.

But you can’t. Not one of these stories really has anything even faintly presidential about it. Oh sure, you may be asked to react or comment, but that does not make it your business. Your business right now is keeping the country moving forward, tending to affairs of state, and most of all, trying to get the economy back on track.

Between now and next November, there will be a million things like this that threaten to drag you, and frankly all the candidates, off course. All of you, however, must hang on like grim death to the central, important matters: unemployment, the mortgage crisis, the deficit, and who is Dancing with the Stars…oh wait….look it happened to me! Dragged down a cul-de-sac of popular culture pap!

I realize that holding a firm line against such nonsense means giving up the headlines now and then, and no one in D.C. seems good at that. For example, you issued a statement today on the elections in Liberia and it vanished like a rock tossed into the Potomac. I’m sorry about that. But don’t let it get you down. Stick to the serious work and let days like this, when the world turns its thoughts largely away from Washington, wash over you, and then press on.

The most important work often makes no headlines, but it can make a difference.

Now, speaking of serious matters, did you see the end of the Steelers-Ravens game last night? Wow! And as always…Geaux Saints! 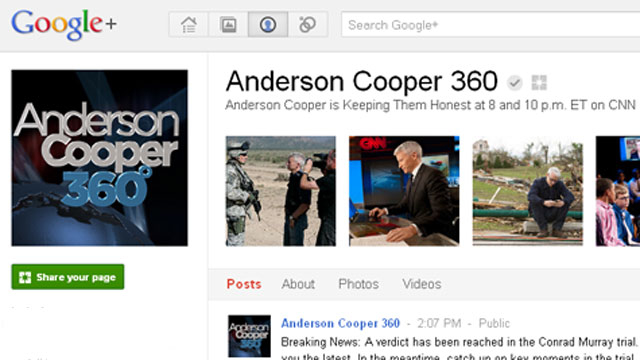 Anderson and the producers at AC360 ° are always looking for new ways to connect with all of you. That's  why we're excited to announce the launch of our Google Plus (G+) page!

It's easy to join, add us to your circles and show some "+1" love on posts you enjoy.  In a few weeks, Anderson and members of the AC360° team are hosting a public Hangout – a live video chat on G+. We want to answer your questions, so submit them now and in real time during the Hangout.

(CNN) - Sal Dimiceli has spent decades helping people get back on their feet.

Through a local newspaper column and his nonprofit, The Time Is Now To Help, Dimiceli assists about 500 people a year with food, rent, utilities and other necessities. He concentrates most of his work in the Wisconsin area where he lives.

CNN asked Dimiceli for his thoughts on being chosen as one of the top 10 CNN Heroes of 2011.

CNN: How does it feel to be selected as a top 10 CNN Hero?

Sal Dimiceli: I'm ecstatic. I want to cry thinking that CNN and people recognize the poverty that is out there so we can help even more people.

I hesitate to talk about myself. My heart is about giving, helping, not receiving. This is such a great, great honor. At the same time, the help I provide is from my desire, my heart, to ease the pain and suffering and fear of the poverty-stricken.