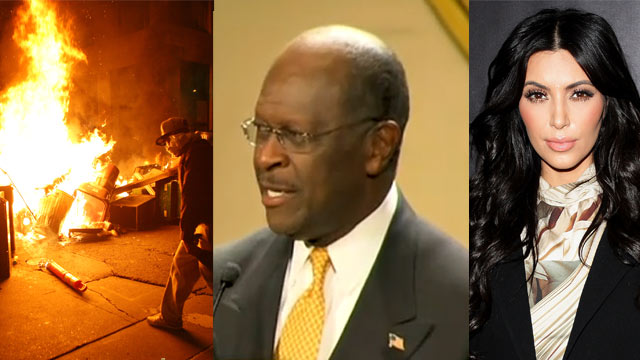 The world population hit 7 billion this week! More people means more news, but don't worry – I've got you covered.  Today we're launching this new addition to our blog to help keep you up-to-date. “The Weekly Buzz” will include political, international, and the downright outrageous stories creating buzz in our newsroom.

…And the Herman Cain saga continues. On Sunday, Politico published an article claiming that Herman Cain was accused by two women of sexual harassment in the 1990s, when he was head of the National Restaurant Association. Since then, Cain has denied the allegations.  However, on Tuesday Cain told HLN that he knew of one "separation agreement," and we had an EXCLUSIVE interview with Joel Bennett, the lawyer for one of Cain's accusers.  Bennett said his client is very angry and she says Cain is not telling the truth. Bennett also told 360° his client made a “good faith claim of harassment.” The client decided she would not reveal her identity, but did want set the record straight. The situation was further complicated when an Oklahoma Republican political consultant told CNN that he witnessed Herman Cain exhibit inappropriate conduct toward a female employee while he led the National Restaurant Association. The Cain campaign responded to reports of a third former employee claiming sexual harassment, by calling them baseless. Now, the question remains: who leaked the story in the first place? Cain blamed a Rick Perry adviser who used to work for him; the Perry campaign suggested Mitt Romney's campaign was responsible. All deny involvement.

The Syrian government has repeatedly denied the violent crackdown on anti-government protesters, but filmmaker Sean McAllister’s detainment in a Syrian prison proves otherwise: “You would hear the most howling, horrific cries of people being whipped and tortured.” You have to hear it for yourself.

In Egypt, protesters returned to the streets on Monday after a prominent blogger, Alaa Abd El Fatah, was arrested for refusing to answer questions from  military prosecutors  about a demonstration he attended last month, which ended in violence and the deaths of dozens of Coptic Christians. His last post on his Twitter account read “going in,” on Sunday. Meanwhile, on the same day, former President Hosni Mubarak’s trial was put on hold for two months after the lawyers of the victims requested the judge be replaced stating he was “…not firm enough.”

On to another hotspot we're following closely. The Arab League announced that Syrian officials have agreed to end the violent crackdown on anti-government protesters. Syria will pull its troops from the streets and release prisoners. But dozens of people were killed on Wednesday, including at least  ten workers  at a  factory  in Homs  province before the Arab League’s announcement.

Here in the U.S., four Georgia  men were charged with plotting a domestic terror attack aimed at government officials using explosives and a biotoxin. Prosecutors say the public was not in imminent danger.  Preliminary hearings are scheduled for the alleged milita members next week.

Some in an Ohio Amish community started to lock their doors at night. They fear attacks on their hair. At least four incidents have been reported of the perpetrators knocking on the doors of Amish homes in the middle of the night and forcibly shaving the community members’ beards and hair. The attacks are allegedly under the direction of one community elder who supposedly heads a splinter group. Gary Tuchman spoke with the victims and the Bishop of the accused sect.

And the Occupy Oakland protesters carried out a strike last night against downtown businesses.  Just about every office building and store within a block of City Hall had been vandalized in the overnight violence – which many of the Occupy demonstrators said was committed by a radical fringe of the movement. Police say they fired tear gas at demonstrators overnight after a crowd threw rocks and shot fireworks at officers. Last week, Oakland police fired tear gas on protesters injuring two-time Iraq War veteran, Scott Olsen.

In sports news, the Dodgers are up for sale!

And even though the World Series posed some competition for Hollywood last weekend, “Puss in Boots” pulled out to the top of the box office with $34 million debut. What movies do you plan to see this weekend?

Does the Kardashian-Humphries divorce have you Kriticizing Kim? You just landed yourself on our RidicuList!

A woman posted a horrific video of her father beating, whipping, and cursing at her seven years ago.  What makes this more shocking is her father is a Texas family court judge who presides over child abuse cases. I was surprised that she was able to get the beating on video, but apparently, she left her video camera on the dresser during the incident and covered its light with a scarf.  Judge William Adams has been suspended for two weeks and is now under police investigation after admitting to being the man in the video. Anderson will speak with Hillary Adams and her mother, Hallie, tonight on AC360° – it's an interview you won't want to miss.

And closing arguments are underway in the Michael Jackson death trial. Dr. Conrad Murray, who is charged with involuntary manslaughter in connection with the singer's death, decided not to testify. The jury could get the case as early as today.

What will happen to Libya? NATO ended its aerial bombing campaign in the country on Monday and U.N. Secretary-General Ban Ki-moon spoke in Tripoli on Wednesday to the National Transitional Council and the Libyan people stressing “it is critical that you find consensus on major issues…that you remain united.”

With the election year fast-approaching, the New Hampshire primary is set for January 10.  Have you heard of Joe Strong? He won a random drawing of the 30 GOP presidential candidates running in the state and he'll be listed first on the ballot. The rest will be listed alphabetically, starting with Rep. Michele Bachmann.