Why does Rick Perry want to skip some future GOP presidential debates? Anderson Cooper is Keeping Them Honest.

Video: The RidicuList: Courtney Stodden and the pumpkin patch incident

After Peter Schiff went to the protests to represent the one-percent, Anderson Cooper spoke with him and Dr. Cornel West about taxes, the wealth gap and the Occupy Wall Street movement.

Video: Widow will not get exotic animals back

Jack Hanna talks about Ohio's decision not to release the surviving Zanesville animals to their late owners' widow.

Tonight on AC360: The fate of the surviving exotic animals in Ohio

Editor's note:  At 8 p.m. ET, Anderson will talk to Jack Hanna about the best options for the surviving animals.

(CNN) - The widow of a man who set free 56 exotic animals he owned before apparently committing suicide will not get back the six that survived any time soon, a spokesman for the governor of Ohio said Thursday.

"Today, the Ohio Department of Agriculture issued a quarantine order" on the animals, said Robert Nichols, press secretary for Ohio Gov. John Kasich. Nichols noted that it has been widely reported that the animals were malnourished and could be diseased, and said they might pose a public health threat.

Marian Thompson - whose husband, Terry, released lions, tigers, leopards, grizzly bears and other animals from his preserve near Zanesville, Ohio, last week - has a right to appeal the order, which is indefinite in length, Nichols said. If she does so, she would be granted a hearing within 30 days.

Letters to the President #1011: 'Your latest book deal'

Reporter's Note: I write letters to the president every day, and he writes books. Apparently, he also sells them.

When I first heard this report of U.S. embassies around the globe buying $70,000 dollars worth of your books as gifts to promote America, I truly thought the information must be wrong. I realize that the embassies have done slightly similar things in the past (as in, buying and giving books by or about former presidents) but the idea that a sitting president would make money off of sales of his own book to government agencies just feels…well, a little unsettling.

And I could not imagine that someone in the State Department would not have slammed on the brakes earlier, by saying something like, “Hey gang, I realize he is the president and we’d like him to like us, but this smacks of a sweetheart, backroom deal. We know it is not, but it certainly smells like it. So put the Obama book purchases on hold. You can buy them after he leaves office. That will be soon enough and will help us avoid what looks like a conflict of interest.”

I’m not utterly discounting the notion that you are a popular world figure, and maybe selling more of your books will help others think well of us. But there are hundreds of great books about America and its leaders that could serve the same purpose.

Hey, here is an idea! Why not have the embassies buy some of those other books, and you include a personal note with each volume to the gift recipient? Something like, “Hi, Leader of the Free World here! I hope you enjoy this holiday gift, and learn something about the great nation of America which might make you less prone to hating us. Sincerely, Barack Obama.”

No one could fault you for that!

Above all that, there is this: I can’t help but wonder what message we are sending when our State Department is giving away tomes about one person, especially when that one person is a sitting president. The greatness of America, after all, is not really its leaders…let alone one of them. Our greatness flows from a whole country of people striving, working, inventing, and struggling to realize not the dreams of one person’s father, but rather the collective dreams of us all.

Just something to keep in mind. I assume you have already arranged to have your publisher at least donate all those copies instead of selling them, yes?

Otherwise, I hope your Thursday is going well. Call if you want to chat. 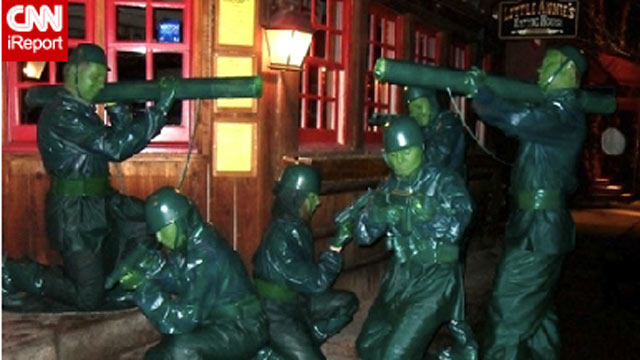 Want to see your Halloween costume on AC360°?

There's tension in the air here in the AC360° newsroom. Monday is our first staff Halloween costume contest, and the stakes are high. There can only be one winner. Like many families, we are a competitive bunch and the prize will be hard fought. Check back on the blog on October 31 to go behind-the-scenes of our "friendly" challenge!

We want our viewers to get in on the Halloween fun too. Submit your creative group costume photos to iReport TODAY and you could be featured on the AC360° blog or on the show this Monday night!