View photos of Anderson and the AC360° team preparing for the debate.

Video: Herman Cain: In it to win it

CNN's Gary Tuchman is on the trail with Herman Cain as he draws considerable support in Tennessee.

Reporter's Note: President Obama is touring a couple of states which could prove key to his re-election. I trust his staff will forward my daily letters.

Here is a big difference between the two of us (I mean, of course, other than that whole “you’re the most powerful man on the planet” thing): I can be sarcastic and you can’t.

I don’t mean that in an absolute sense. Of course you can be sarcastic if you wish. I’m just saying that it is something you probably should not want to be.

Look, if I make a sarcastic crack, some people may think I am infantile, or an idiot, or both. But ultimately, they don’t really care because all they have to do is click their mouse or change the channel and they can find someone else to annoy them. But we have only one president. And when you get sarcastic, I think it can smack of a certain pettiness that may not sit well with a lot of voters.

For example, you made a joke about Republican lawmakers today; about how you are breaking up your jobs bill into smaller parts because, "Maybe they couldn't understand the whole thing all at once.” I’m not sure if I have that quote exactly right, but if you think about it, it was a thinly veiled way of saying, “Anyone who opposes me is stupid.”

Oh sure, it played well with the crowd at that event with you, but that’s not who you need to win over. They’re already in your corner. No, the polls suggest the folks you need for re-election are the ones sitting at home thinking…yes, the Republicans have made mistakes, but so have you, Mr. President.

See what I mean? Imagine how your comment played in their homes.

I will grant that we have become a sarcastic nation. We think nothing of cracking wise all the time about almost everything. I’m as guilty as the next guy. But my name won’t be on the ballot next fall. However, if I were I’d focus more on telling people what I’ve done for them, rather than making snarky comments about how other politicians have let them down too.

Hope your Monday is going well on the road. Hey, send a postcard if you get a chance!

AC360 Behind the scenes at CNN's Las Vegas debate

Anderson and the Anderson Cooper 360° crew are in Las Vegas preparing for tonight's Republican presidential debate. View the photo gallery for a sneak peak, and join us at 8 p.m. ET when the candidates take the stage with Anderson moderating the discussion.

If you submit your questions to CNN, they may be asked at the debate! You can also submit them on the CNN Politics fan page on Facebook and by using #CNNDebate on Twitter. 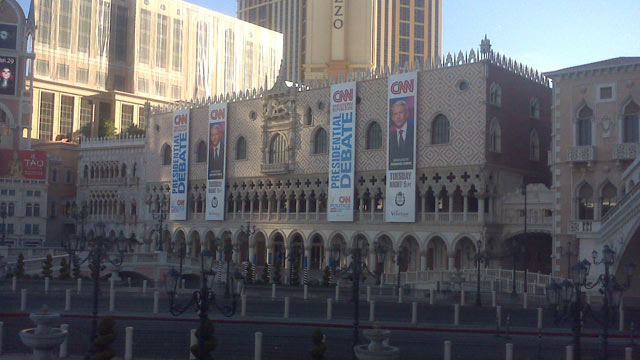 Do you have a question for one of the candidates? It could be asked at the debate, so submit your questions now! You can also ask on the CNN Politics fan page on Facebook and by using #CNNDebate on Twitter.

(CNN) - After being stricken with cancer, Patrice Millet dedicated his life to helping children in his native Haiti.

In 2007, he started a nonprofit youth soccer program called FONDAPS, which stands for Foundation Notre-Dame du Perpétuel Secours (Foundation of Our Lady of Perpetual Help). The program provides free equipment, coaching and food to hundreds of children from Haiti's poorest slums. Its aim is to teach the children to become responsible citizens.

CNN asked Millet for his thoughts on being chosen as one of the top 10 CNN Heroes of 2011.

Patrice Millet: I was getting home - coming from a visit to an orphanage in Petionville - when I received the call.

I must also confess that I stress just a little thinking about all the things this implies: the media, the interviews, the photos. I am not used to all this press or all this attention around me, but if it is to help the children even better, I shall become used to it.