CNN's Deb Feyerick explains why the defense in a triple murder trial is blaming the victims in closing arguments.

The Anoka-Hennepin school district in Minnesota does not allow teachers to discuss homosexuality in school. Gay, or perceived to be gay, students say the so-called “neutrality” policy creates a toxic environment for them in school. Four teens, who are suing the district to get the policy changed, recently spoke to Anderson Cooper about the horrors they face every single day. The district declined to speak to AC 360° about their allegations citing the ongoing litigation but in May, the district’s superintendent Dennis Carlson defended the policy to CNN saying, “All the students come with parents in this community and parents have a wide range of beliefs. We serve them all.” 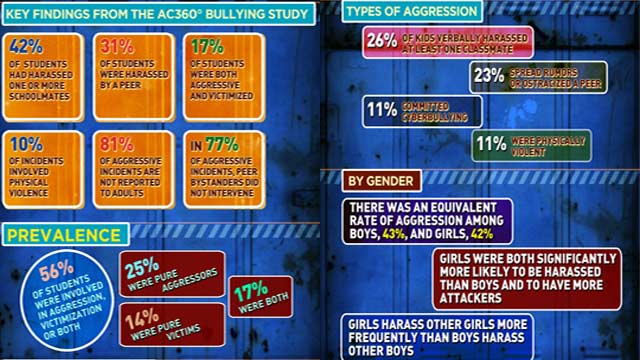 CNN’s Anderson Cooper 360° recently partnered with UC Davis sociologists Robert Faris and Diane Felmlee to engage in a systematic social network analysis of school bullying and aggression. They surveyed students at the Wheatley School, which has about 800 students, about aggression at four time points over the Spring of 2011. The infographic outlines some of the key findings:

Some Republicans seems to be changing their message on the "Occupy Wall Street" protesters. We're Keeping Them Honest. Plus, a new poll suggests there's a new frontrunner in the GOP race for the White House, and it's not Mitt Romney. That's Raw Politics. Plus, more of our special report on bullying in America's schools.

We also want to let you know the Live Chat is retiring after tonight, but the conversation with our viewers continues everyday. We’d like to thank everyone who has added their unique voice and perspective over the years, and hope you’ll consider continuing the discussion on Twitter. You can chat with us by following @AndersonCooper and @AC360 on Twitter – we hope to see you there!

Letters to the President: #996 'The Iranian plot'

Reporter's Note: The intelligence community in DC is buzzing over the discovery of an apparent murder plot hatched by Iranians. I assume the White House is also buzzing over my latest letter.

This news about the Iranians apparently plotting to attack the Saudi Ambassador to the U.S. is wild, isn’t it? This is yet another good reason why I should never be president. It is so outlandish, I’d have trouble taking such a claim seriously.

“Mr. President, we believe the Iranians have struck a deal with a Mexican drug cartel to assassinate a Saudi leader here.”

I have trouble figuring the angles in this one. I get that the Iranians are none too fond of the Saudis, and heaven knows Ahmadinejad acts like he might have a few leaks in his canoe. But why they would want to launch such an attack here seems baffling.

Such a plan would be complex, difficult, and risky in so many ways, especially considering that they’d be traveling around the world to do it when Saudi Arabia…hello…is practically next door. On top of which, I’m not sure what their goal would be. Getting rid of that specific player? Embarrassing America? Triggering some kind of rift between us and the Saudis?

That’s the thing, isn’t it? When we try to figure out someone else’s motives, we almost always do so within the framework of what we consider logical. And their logic may be entirely different. The secret is to get inside their heads and try to see it from their point of view.

So here goes: trying…trying…no, still don’t get it. But I guess that is no surprise. The Iranians have been puzzling us for decades now, and I suppose that will continue for some time, especially as long as whacky plots like this one keep appearing on the radar.

Hope all is well with you. Did you try to call really late last night? I was working, but my wife says she heard the phone and just couldn’t get to it in time.

As part of Anderson Cooper's special series, Bob Faris and Rachel Simmons discuss how schools can overcome the bullying crisis.

Tune in to AC360° all week for the surprising results of a study on bullying, and the “Bullying: It Stops Here” town hall on Friday, October 14 at 8 and 10 p.m. ET.

Tune in to AC360° all week for the surprising results of a study on bullying, and the “Bullying: It Stops Here” town hall on Friday, October 14 at 8 and 10 p.m. ET.

The Anoka-Hennepin school district in Minnesota does not allow teachers to discuss homosexuality in school. Gay, or perceived to be gay, students say the so-called “neutrality” policy creates a toxic environment for them. Four teens, who are suing the district to get the policy changed, recently spoke to Anderson Cooper about the horrors they face every single day. The district declined to speak to AC 360° about their allegations, citing the ongoing litigation but, in May the district’s superintendent Dennis Carlson defended the policy to CNN saying, “All the students come with parents in this community and parents have a wide range of beliefs. We serve them all.”