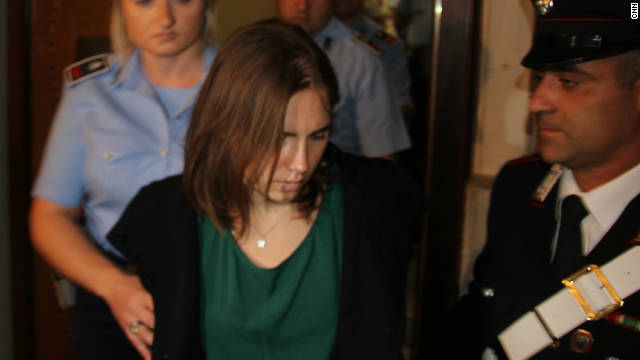 Amanda Knox enters the court in Perugia, Italy, on Monday on the last day of her appeal
October 4th, 2011
07:45 PM ET

Acquitted murderer Amanda Knox is expected land back in her hometown of Seattle any moment. We'll have live coverage of return tonight on AC360°.
Plus, three girlfriends of Dr. Conrad Murray testify at the Michael Jackson Death Trial. One of them said Murry had shipments of the drug that officials said killed Jackson shipped to her home. Plus, tonight's other headlines.

Reporter's Note: The president will apparently not face the Governor of New Jersey in his re-election bid. He will, however, have to face my daily letter to the White House.

I don’t know a whole lot about Chris Christie to be honest, but I am always amazed when someone can completely dominate the news by not running for office. It’s really a amazing. I wish people were that interested in me.

“Hey folks, I decided not to act in a movie and win an Oscar this year.”

You know, a lot of folks were interested in you running in 2008 before you did, but not so many that it would have been a big deal if you decided not to. I think at best you would have been given a paragraph on page 23 of the Chicago papers; something along the lines of “Obama Won’t Run.”

Now, of course, it is a wildly different story. If you decided not to seek re-election it would be like a bomb went off in this city. There would be more debate, discussion, analysis and carrying on than you could shake a stick at.

Strangely enough and despite all that, I really did think for a while that you might not try to keep the White House. I figured you were fairly young, still had young kids at home, had a rough time in the first four years and might not relish the possibility of losing, so you might just step aside; retire with the trophy so to speak. But obviously you chose a different course.

So where do you stand? With today’s news and if the polls are to be trusted, it looks like you’ll be running against Mitt Romney. But then, the polls said Hillary Clinton was going to win your party’s nomination last time, so who knows?

All I know is that I have no plans of running, and that’s not making any news.

On another front: Did you see the Bangles on TV this morning? I’ve always loved their music and before they fired up, I dreaded that the years would have ravaged their tight harmonies, but they sounded great!

I saw them perform in New Orleans years ago and went backstage to say a quick hi Michael Steele and Susanna Hoffs. Steele apparently has moved on to other things, which is a bummer. Still, my wife and I may go check them out Thursday at the 9:30 Club. If you and Michelle want to go, give me a buzz and I’ll score some extra tickets.