Anderson Cooper remembers the search for justice for victim Meredith Kercher on the eve of Amanda Knox's acquittal.

Letters to the President: #987 'News from overseas'

Reporter's Note: The president has to deal with plenty of international affairs, and once in a while one of them gets a lot of interest from the public, as I note in today’s letter.

Well, I don't know if you've been outside over the past 48 hours but it certainly feels as if frosty autumn has arrived. The plunge in temperature this weekend caught me off guard, to be sure. Actually, it caught me twice; here and in Atlanta where I went to run a half marathon with my daughter who is at Georgia Tech. Cold there too! But it was a nice run.

So I assume you've seen the news about Amanda Knox finally going free over in Italy? No doubt a great relief for her family. She will, of course, never again know the life she knew before all of this began. I don’t suppose anyone that age, or maybe of any age, could be imprisoned for several years and then just go back to his or her former life unchanged.

My fascination with such cases does not have much to do with the specific details of guilt or innocence. No, what usually intrigues me is the difference in the legal proceedings proper. I find it terribly interesting to see how legal systems around the globe have such widely different views of how to best consider the evidence and mete out justice.

We grow so accustomed to the legal system under which we live that it is hard to remember that not everyone plays by the same rulebook. I often remind friends of this fact when they travel abroad, because some action which might seem relatively serious but manageable in a legal sense here can bring dreadful consequences elsewhere. Hey, I saw Midnight Express!

Anyway, it will be interesting to see what, if anything, she has to say when she returns home. I’m pretty sure there will be a massive book deal in the not distant future and an “Amanda Knox: The True Story” movie, too.

What are you up to this week? Sounds like your push for a vote on the jobs bill is not going particularly well. Call if you feel like chatting it over.

The restaurant famous for wings and other things is on The RidicuList for filing suit against a similar establishment.

A new controversy hits Rick Perry's presidential campaign. It involves a deeply offensive racist slur and a ranch associated with the Perry family. Anderson Cooper is Keeping Them Honest.

An Italian jury has cleared Seattle-native Amanda Knox of murder. Knox is free from prison tonight. She's back with her family and making plans to return to the United States within hours. But to some there's no justice for Knox's murdered roommate Meredith Kercher. We'll have all the breaking news developments in the case. Plus, here at home, the ER doctor who declared Michael Jackson dead testified in the involuntary manslaughter trial of Dr. Conrad Murray's today. And, the restaurant battle between Hooters and Twin Peaks lands on our RidicuList. 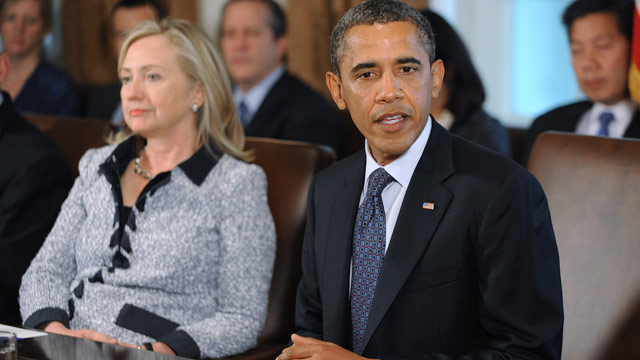 Viewer:
"Obama: Excuse me, could we get some muffins? Those good sixteen-dollar ones. Thanks."
Jessica

Staff:
"With Joe Biden off at his weekly Kiwanis meeting, Secretary Clinton was given the critical job of pretending to listen to the president."
Tom Foreman

Editor's note: Voting for the CNN Hero of the Year continues through December 7 at CNNHeroes.com. The winner will be announced at "CNN Heroes: An All-Star Tribute," which airs December 11, live at 8 p.m. ET/5 p.m. PT.

(CNN) - Surrounded by gang violence in her Chicago neighborhood, Diane Latiker opened her home to area youth and started a community program called Kids Off the Block.

CNN recently asked Latiker for her thoughts on being chosen as one of the Top 10 CNN Heroes of 2011.

CNN: Where were you when you got the call that you'd been selected as a Top 10 CNN Hero?

Diane Latiker: I was just finishing up a meeting at Kids Off the Block. I cannot explain the feeling when they told me about my selection. Euphoria hit me smack-dead in the head!