The U.S may be selling $53 million in weapons to Gulf ally Bahrain. Is it a dangerous deal? We're Keeping Them Honest.

David Gergen is putting the "party" back in "political party" with his new drinking buddy, George Clooney.

A deal is reached in the Senate to avoid a partial government shutdown. We'll have the breaking news. Plus, the Defense Department is considering giving Bahrain $53 million dollars in military equipment. Yes, Bahrain, a government accused of killing its own people in political uprisings. We're Keeping Them Honest. Plus, tonight's other headlines. 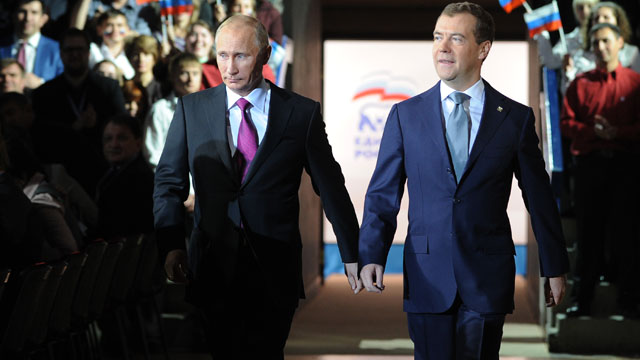 Staff
“Medvedev and Putin proudly show off their bargain shopping skills after a 2 for 1 sale at Men's Warehouse.”
Ben Finley

Letters to the President: #980 'At home with the Bickersons'

Reporter's Note: President Obama is watching another showdown at the Capitol over spending. It must be depressing. So it is good that he has my daily letters to look forward to.

Have you ever waded into a room full of bickering kids, with each side furiously blaming the other for starting the fight? How did you handle that situation?

My suspicion is, unless you had strong evidence that one side truly was to blame, you punished the whole crew; making everyone focus on the downside of fighting. Something along the lines of, “That does it. Everyone go to your rooms, sit there, and think about what you’ve done. Don’t even ask when you can come out, six months won’t be too soon!”l

That’s how I think a lot of Americans feel about the whole Congressional crowd these days. How is it possible that just weeks after the last manufactured crisis over the budget, we have another one? I know as surely as I believe in gravity, that there are some rational, thoughtful folks up on the hill. You need to send the FBI to see what has happened to them. I have visions of a broom closet where they are tied and gagged, lest they break free and accomplishment something reasonable.

How to solve it? I realize you look to me for advice, but I have to admit that I just don’t know. Partisans on both sides have become so powerful and loud that any voice of moderation is immediately shouted down. But here is something I do know: The result of this continuing disaster in governance may well wind up in the decimation of both parties.

Make no mistake about it: While some voters on the left and right still want to duke it out this way because they are convinced their side can win, the vast majority of Americans are sick to death of it, and I believe they are going to punish, punish, and punish again all elected officials who cling to this idea of party victory over general good.

Ah well…moving on. Did you see that my Saints pulled out another win this weekend? And Georgia Tech is undefeated! We went to the Tech game and managed to all get sunburned, but it was well worth it. You should have been there. On the other hand, I would invite you over for Monday Night Football, but I have a little bit of a cold now. Maybe next week.