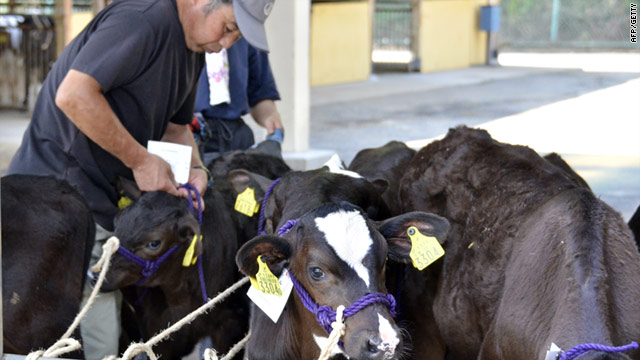 Calves are prepared after arriving at a dairy cattle market to be put up for auction in Fukushima prefecture on July 14.
July 19th, 2011
09:00 AM ET

Tokyo (CNN) - Japan announced Tuesday it is banning all shipments of cattle raised in the Fukushima Prefecture amid fears that the meat may have been contaminated from radiation at the crippled Fukushima Daiichi plant.

"If we were to eat the meat everyday, then it would probably be dangerous," Goshi Hosono, state minister in charge of consumer affairs and food-safety, said at a news conference on July 12.

"But if it is consumed only in small portions, I don't think it would have any long-lasting effects on the human body."

When the Fukushima Prefectural Government investigated the farm that was the source of the meat, it found cesium in cattle feed such as hay, with radiation levels as much as 57 times higher than the ceiling set by the Japanese government.