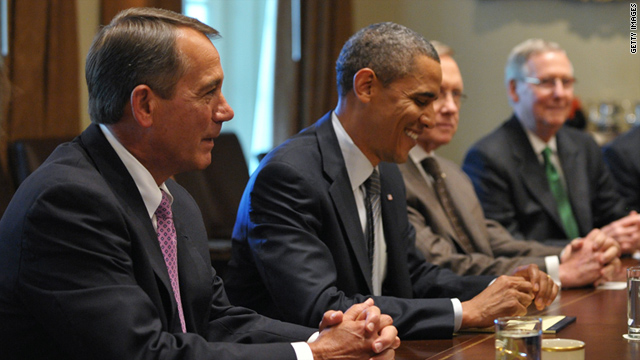 Washington (CNN) - Here it is - a cheat sheet to the talks over the national debt. These are the plans on the table, simplified and put in terms a human being can understand:

• August 2 - the date when the federal government is forecast to hit the debt limit and see all new loans cut off. Falls during "Simplify Your Life Week." Really.

• $2.4 trillion - the increase to the debt limit officials think is needed to get the government through November 2012.

• $4 trillion - the amount of deficit reduction in a longer, broader, "grand compromise" idea.

Plans in the discussion

From smallest to largest:

1. The "fallback": The McConnell and McConnell/Reid plans

These plans are built in case Congress and the White House cannot reach a specific deal on raising the debt ceiling. In theory, they include relatively simple legislation and could lead to an increase in the debt ceiling in a matter of days.

The mechanisms for that plan are complex, but just believe us that those are the bottom lines.

The two leaders are considering an attachment of $1 trillion to $1.5 trillion in spending cuts. And they are talking about a commission or group that would propose spending cuts and possibly wider reform. This plan is fluid, but right now the idea is to create something similar to the Defense Base Closure and Realignment Commission, guaranteeing the commission's recommendation a straight up-or-down vote in each chamber of Congress. That group could speed up the process to cut spending.

Supporters: This "fallback" could save the U.S. from hitting an unprecedented financial wall. It also takes the politics out of debt ceiling debates.

Opponents: The McConnell plan requires no spending cuts or change in fiscal policy. It demands only proposals, which Congress may or may not pass. Even if the McConnell/Reid spending cuts are included, this idea makes few or no difficult fiscal decisions.

2. The 'kick the can' short-term deal

This proposal could take many forms but would raise the debt ceiling for a matter of weeks or a few months, with offsetting spending cuts and/or revenue changes.

It may be as much as $1.5 trillion or as little as a few hundred billion.

President Barack Obama has repeatedly said he will not sign such a deal. But in White House talks Wednesday, House Majority Whip Eric Cantor, R-Virginia, suggested looking at a short-term bill, famously leading to a pronounced pushback and a musical flourish, Jed Bartlet-style moment. "This could bring my presidency down," Obama said, according to Republicans, "but I will not yield." Both sides agree he ended the meeting at that point.