Editor's note: The Marriage Equality Act was approved in the New York State Senate Friday night by a vote of 33-29.

Editor's note: Gary Tuchman reports on a an emotional day of testimony in the Casey Anthony trial.

Video: 'We will carry on,' says Syrian student

Editor's note: Anderson Cooper speaks with a Syrian college student about what is going on in his country.

Editor's note: CNN's Anderson Cooper reports on ongoing protests in Syria despite a brutal crackdown by the Assad regime.

AC361: Inside the control room

Editor's note: The producers and staff of Anderson Cooper 360 take you inside their control room during a broadcast.

Is the State of the New York about to make history by legalizing same-sex marriage? We are closely watching events in Albany tonight where the State Senate is expected to vote on gay marriage.

Letters to the President: #886 'The new normal? Hardly'

Reporter's Note: President Obama works pretty hard. But then the rest of us do too these days, or we don’t work at all. Tough choices.

I’ve never been a particular fan of this phrase “accepting the new normal.” I hear people toss it around after some kind of cataclysmic event, and I understand what it means - it is all about letting go of how your world was before and accepting how it is now. But like I said, I don’t much like it. Why?

First: This is much easier said than done. For most of us to get through a day without going crazy, we have to have some faith that certain things are going to go pretty much as we expect. The trains have to run reasonably on time. Work needs to start and end within some sort of accepted parameters. The steak has to be on the grill for 4 minutes a side. Without such continuity, we end up floundering and feeling as if we simply can’t count on anything.
END_OF_DOCUMENT_TOKEN_TO_BE_REPLACED 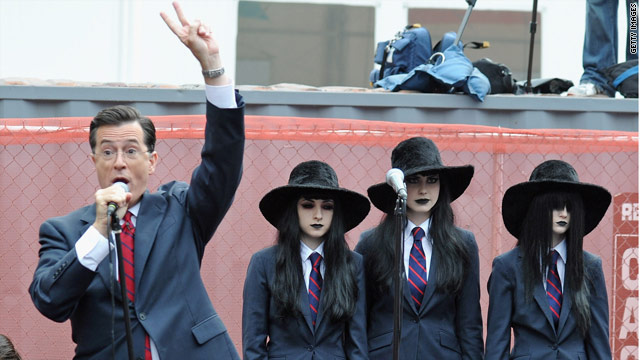 Staff
Ben Finley
“Keeping up with the Kardashians….and Stephen Colbert.”

Viewer
Colleen Hart
“They're creepy and they're kooky
Mysterious and spooky
They're all together ooky..."

Orlando (CNN) - Two-year-old Caylee Anthony was able to climb into the family's backyard pool on her own, but she couldn't have installed the removable ladder or opened gates leading to the area, her grandmother testified Friday at the outset of an emotional day in the Casey Anthony murder trial.

Defense attorneys are trying to prove that Caylee could have accidentally drowned in the family pool on June 16, 2008. They argue Casey Anthony and her father panicked when they found the girl's body and covered up her death.

Prosecutors argue Casey Anthony used chloroform to render her daughter unconscious, put duct tape on her nose and mouth to smother her, and then stored her body in the trunk of her car for a few days before disposing of the remains in a wooded field.

But Anthony's defense team has worked intently to call that theory into question in the last few days as the trial rolls toward the end of its fifth week.

On Thursday, Anthony's mother, Cindy Anthony, testified she was using a family computer to search for terms including chloroform and alcohol in March 2008, three months before Caylee disappeared.

She testified Friday about how Caylee was always anxious to get into the pool and how she could climb and descend the pool steps virtually unaided as she approached her third birthday.

Then Anthony's brother, Lee Anthony, took the stand to say that stains in the back of the trunk were there when he owned the car from 2000 to 2005, and probably before. Witnesses for the prosecution have said subtle stains in the trunk of the car could have been made by fluids from the girl's decomposing body.

Later, Anthony and her brother both began to cry when defense attorney Jose Baez asked why he didn't visit his sister in the hospital after Caylee was born in 2005. He said he had only one brief conversation with his mother about his sister's pregnancy until just days before Caylee was born.

"I was very angry at my mom and at my sister," he said. "I was just angry at everyone in general that they didn't want to include me, didn't find it important enough to tell me."