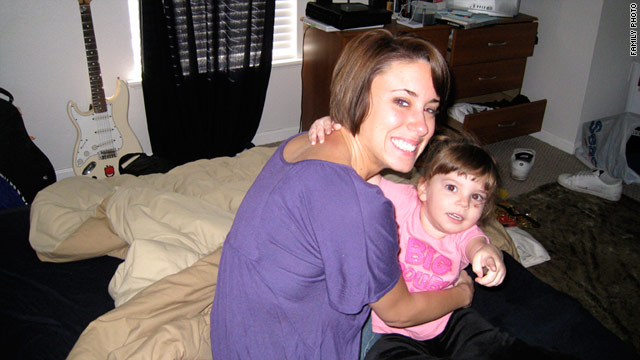 Orlando, Florida (CNN) - Here in the land of Mickey, where parents lavish time and money to immerse their little ones in the magic of childhood, another name has stolen the show: Casey.

Casey Anthony, 25, is accused of killing her doe-eyed toddler and the murder trial is inescapable this summer: Inside the diner, the gym, the hair salon - even the car wash - TV screens are tuned in to the coverage and grabbing eyeballs.

At Fields BMW in suburban Winter Park, no one has switched channels in the customer lounge since testimony began four weeks ago.

The drama sucked in Trevor Ball this week as he waited for his wife's BMW to be serviced. He fired off a Casey update to her by text: The prosecution rests.

Half the people who turn on their TVs in Orlando during the daytime are watching the trial, says Steve Hyvonen, news director at WKMG, a CNN affiliate. That usually only happens here when a hurricane hits.

So it's no surprise that all the local television stations have abandoned normal daytime programming to carry the trial live. Even the U.S. Open comes in second to Florida vs. Casey Anthony.

"It's the biggest thing that has happened in Orlando in years," said Mike Boslet, editor of Orlando magazine. "The whole world is watching."

Cable TV's usual suspects - Nancy Grace, Greta van Susteren and Geraldo Rivera - come and go in black SUVs from "Casey Land," the tent city that occupies a vacant lot across the street from the Orange County Courthouse. The scene is reminiscent of big trials of the past: O.J. Simpson, Michael Jackson, the Menendez brothers, Scott Peterson.

Why the Anthony case?

"You've got this attractive young mother and this horrible death of a child," said Robert Thompson, who teaches television and popular culture at Syracuse University.

"And then there are all those details - all the made-up jobs and made-up people and the 31 days the child was missing. Those are the kind of details that make this better than a crime drama," he explained.

"Once you start following this story, you're hooked."

The true-crime spectacle often threatens to obscure a sad truth: A little girl named Caylee never got to grow up. And a teenager with a wild streak had a baby too soon.

Caylee was a mistake, Casey's mother used to say. But she'd always add that the adorable little girl was the best mistake Casey ever made.