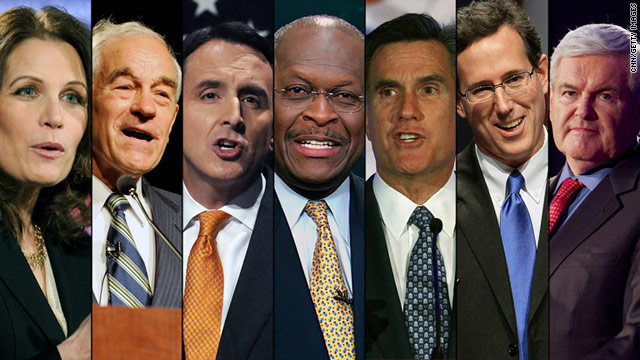 Seven Republican presidential contenders face each other Monday in New Hampshire, in one of the first primary debates.
June 13th, 2011
07:16 PM ET

Editor's note: CNN hosts the first New Hampshire Republican presidential debate Monday night from Manchester at 8 p.m. ET. Follow all the issues and campaign news about the debate on CNNPolitics.com and @cnnpolitics on Twitter. Watch the debate on CNN TV, CNN.com and mobile devices. And participate with your questions on the live blog on the CNN Political Ticker.

Manchester, New Hampshire (CNN) - Seven declared or likely Republican presidential contenders will face off Monday in one of the first debates of the primary season, giving them the chance to separate themselves from the competition almost 17 months before the 2012 election.

With President Barack Obama intent on re-election, Republican viewers will pay particularly close attention to try to determine which candidates can defeat an incumbent who won in 2008 with strong support from independent, minority and young voters.

Former Massachusetts Gov. Mitt Romney, who ran unsuccessfully for the Republican nomination in 2008, has emerged as an early front-runner in his second bid for the White House.

Profiles of the seven hopefuls

A CNN/Opinion Research Corp. survey released Monday showed Romney grabbing the support of 24% of Republicans and independents who lean toward the GOP. Former Alaska Gov. Sarah Palin came in second at 20%, followed by former New York Mayor Rudy Giuliani and the rest of the field.

Palin and Giuliani, who have not announced that they will join the race, are not participating in Monday's CNN/WMUR/New Hampshire Union Leader debate.

As the current favorite, Romney will face almost certain criticism from his fellow candidates.