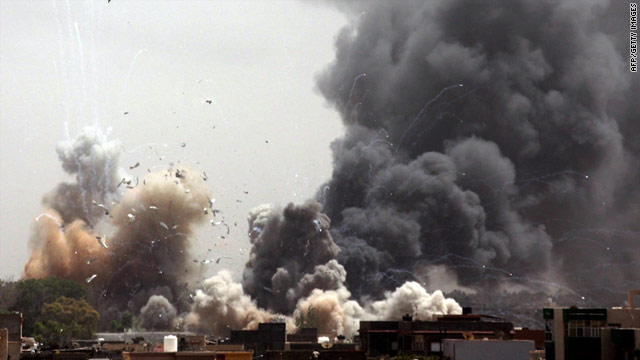 NATO has stepped up its bombing campaign against key targets in Libya's capital in recent days.
June 9th, 2011
05:45 PM ET

Talk at the meeting in the United Arab Emirates focused on sustaining pressure on the embattled Libyan leader. U.S. Secretary of State Hillary Clinton said "numerous and continuous discussions" on a transition of power were taking place among people close to Gadhafi.

A spokesman for a Libyan opposition group told CNN that Gadhafi's son, Saif al-Islam Gadhafi, was the primary negotiator for an exit plan for his father, but suggested the timing of the talks might not be good.

"I'm not sure there's a lot of people willing to listen right now," said Mohammed Ali Abdallah of the National Front for the Salvation of Libya.

Abdallah said a southern front had opened up in the fighting and that Gadhafi's days were numbered.

"We are in the final phases," Abdallah said. "Gadhafi's military power has significantly been reduced. He is basically rattled."

Clinton announced an additional $26 million in U.S. aid for the victims of Libya's ongoing war and said time was on the international coalition's side so long as Gadhafi faced sustained pressure.

"The violence must stop," she said. "Gadhafi must go."

Financial assistance flowed at the meeting, the third the international Libya group has held since war erupted.

Italy pledged up to $580 million to the Libyan opposition's Transitional National Council - which is facing a budget shortfall - to cover its expenses, but not weapons, Foreign Ministry Spokesman Maurizio Massari said.

France, Italy and Qatar are among a small number of countries that have recognized the Transitional National Council as the legitimate government of Libya.

While the United States has yet to officially recognize the rebel government, President Barack Obama "has invited them to open an office in Washington," a senior administration official told reporters traveling with Clinton to the meeting in Abu Dhabi.

The official spoke on condition of anonymity as a matter of practice for a press background briefing.