Editor's note: Anderson Cooper speaks to a panel of guests about the controversy surrounding a posting to a lawmaker's Twitter account.

Rep. Anthony Weiner's Twitter scandal isn't dying down. Today he talked with CNN's Wolf Blitzer. The conversation got a bit tense at times. Hear what he's saying about the controversy. We're Keeping Them Honest. Plus, a strange twist in the story of the 13-year-old boy who was reportedly killed by the Syrian regime. The boys father and uncle are speaking out and their message has shocked many. We'll have these stories and much more.

(CNN) - A liberal Democratic congressman who came under fire for a lewd photo that briefly appeared on his Twitter account over the weekend told CNN Wednesday that he did not post the image.

Democratic Rep. Anthony Weiner spoke to CNN's Wolf Blitzer a day after a contentious exchange with reporters in which he refused to directly answer any questions about the picture.

On Wednesday he said he had hired a law firm to look into the matter. But he declined to directly answer whether he appeared in the photo.

"Photos can be manipulated. Photos can be of one thing and changed to something else. We're going to try to get to the bottom of what happened," he said. The photo showed the lower body of a man wearing underwear.

A conservative blogger who broke the story has called for a full investigation of what he said was either the hacking of a congressman's account or something Weiner wants to hide.

But Weiner told CNN he did not think such steps are necessary to deal with what he said was internet spam, an issue that many Americans face.

Report: Syrian abuses could be 'crimes against humanity'

(CNN) - The Syrian regime has carried out a "systematic" series of abuses against protesters that could "qualify as crimes against humanity," and the United Nations must hold the government accountable, a leading humanitarian watchdog organization said Wednesday.

Human Rights Watch makes these assertions in a report titled "'We've Never Seen Such Horror': Crimes against Humanity in Daraa."

The 57-page document contains chilling detail from dozens of victims and witnesses to abuses in Daraa province, the southwestern Syrian powder keg where the anti-government protest movement began in mid-March before spreading across the country. The government reacted with a tough crackdown against protesters.

At present, the report says, there have been about 887 deaths "across Syria," including at least 418 people in Daraa province.

"They need to stop - and if they don't, it is the Security Council's responsibility to make sure that the people responsible face justice."

Human Rights Watch said the Syrian government should take "immediate steps to halt the excessive use of lethal force by security forces" and that the U.N. Security Council "should impose sanctions and press Syria for accountability."

If the government "doesn't respond adequately," the council should refer Syria to the International Criminal Court, the group said.

One major diplomat on Wednesday echoed the international outrage over Syria's crackdown and raised the issue of ICC involvement. 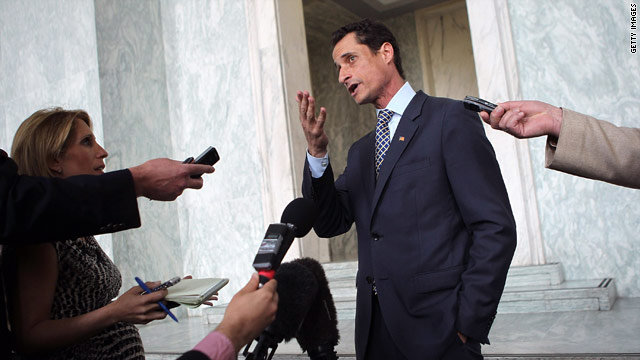 Staff
Joey Gardner
“Let me be brief. This whole thing has been blown way out of proportion. It’s just nuts.”

Viewer
Alexander Constantine
"Please...please! You are over-exposing this situation. It was simply a brief encounter!"

Letters to the President: #863 'Master blaster says power off!'

Reporter's Note: I don’t think the White House ever has power outages. But they do have letters from me…every single day. That should be draining enough.

Perhaps you have heard that our news bureau over by the Capitol suffered a pretty serious power failure yesterday; as in, we pretty much have none. Apparently this affected a sizeable portion of this part of the city (including the Federal Energy Regulatory Commission. Ha!) and, at last word, we’re not going to have all the lights back on until some time tonight. (Here’s a strange thing though, the automatic faucets in the restrooms are still working…even in the dark! Go figure.)

As a result a colleague and I had to retreat to her home to work on our news story for last night. It was fine. We had plenty of power for our computers and phones there plus a box of Wheat Thins, so in some ways it was nicer than being at the office.

Still, the whole business has me thinking about infrastructure again. I still don’t fully understand what went wrong, but apparently this was somehow linked to the increased demand on the system by air conditioning units. Or something like that. Could have been a squirrel in the generator for all I know.
END_OF_DOCUMENT_TOKEN_TO_BE_REPLACED