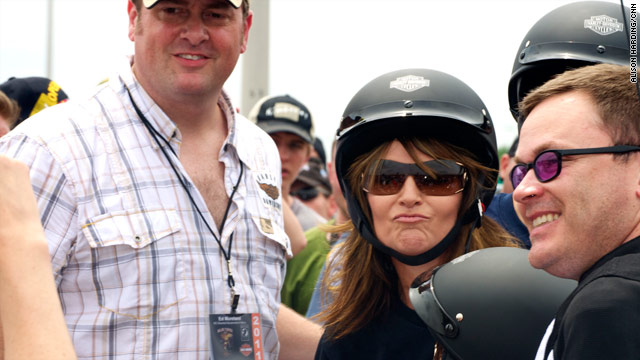 (CNN) - Politicians are in plentiful supply this Memorial Day as the ramp-up to the 2012 presidential election begins in earnest.

She told CNN on Monday that she plans to take her "One Nation" bus tour to Iowa, the state that votes first in the race for the Republican presidential nomination.

"I'm sure at some point I will be going to Iowa," Palin said.

The 2008 Republican vice presidential nominee told reporters earlier on Monday she is "still kind of contemplating" a White House run.

"I think any Republican candidate is very, very electable," she said. "I think Americans are ready for true change."

Palin's Memorial Day schedule will also take her to the battlefield at Gettysburg, Pennsylvania.

Over the next few days, Palin's "One Nation" bus tour is also scheduled to make stops at historic sites in Massachusetts and New Hampshire, the latter home to the nation's first primary.

"This isn't a campaign bus," she said. "This is a bus to be able to express to America how much we appreciate our foundation, and to invite more people to be interested in all that is good about America."

"We don't need to fundamentally transform America," she added. "We need to restore what's good about America."

Rep. Michele Bachmann of Minnesota, who would compete with Palin for Tea Party support should she run, was attending Memorial Day events in New Hampshire.