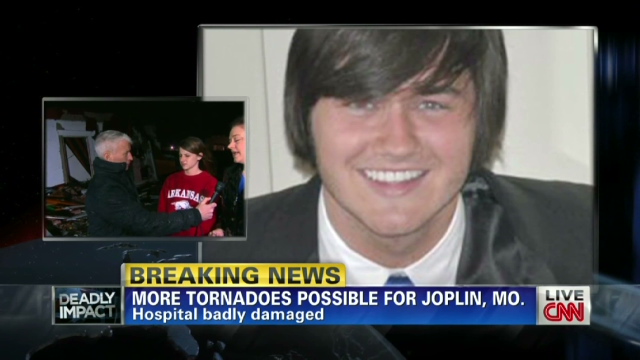 Will Norton's family began an agressive search for him soon after a massive tornado struck Joplin, MO nearly a week ago. Anderson spoke Monday with Norton's sister and aunt on AC360°.
May 28th, 2011
09:15 PM ET

Update: Will Norton among those killed by Joplin tornado, according to authorities

Among the dead was Will Norton, a recent high school graduate who attracted national attention when he disappeared during the storm.

The 18-year-old was driving home from his graduation Sunday when the tornado destroyed the Hummer H3 he and his father were in.

"Mark (Norton's father) said that he reached over and he grabbed Will with both of his arms ... he held on to him until he possibly couldn't anymore and so he's feeling really bad about that because as a dad you don't want to ever let go of your kids. You want to protect them forever. But at least we know that he did absolutely everything he possibly could," said Tracey Presslor, Norton's aunt, through tears.

Norton's body was found Friday by divers in a pond close to where his vehicle had been.

Meanwhile, 100 persons remain unaccounted for, the Missouri Department of Public Safety said in a statement Saturday.