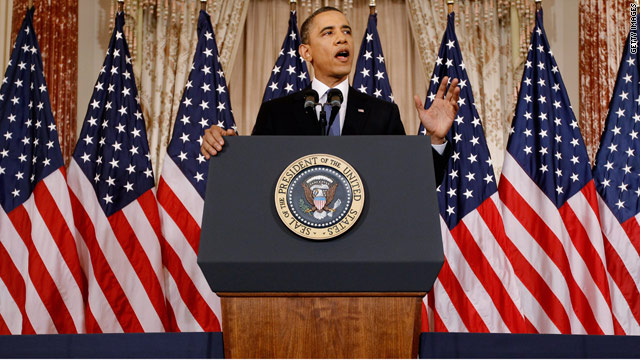 (CNN) – As mixed reaction continues to pour in to President Obama’s speech about U.S. policy in the Middle East, he is earning praise from at least one activist fighting for her life inside Syria.

“It has [a] good impact on the people,” Razan Zaytouni says in an interview set to air Friday on AC360°.

Zaytouni, a Syrian human rights lawyer, spoke to Anderson Cooper from an undisclosed location inside the country. She says Syrians were heartened to hear that the United States cared about them and added that it was important to know that the president did not, “believe any of the lies or claims of the [Syrian] regime.”

The president stopped short, however, of calling for Syrian President Bashar al-Assad to step down, a demand anti-government protestors in the country have been making for weeks.

Obama’s words seem to have gone unheeded by Assad’s regime.

Zaytouni told Cooper that at least 34 people were killed Friday in Syria as protestors clashed with security forces after weekly Muslim prayers. The Syrian activist added that weapons were used much more heavily by government forces in today’s crackdown than in weeks past.

“The goal was to end the protest in any way, no matter how it would cost in blood,” she said.

The protests and crackdown have touched Zaytouni’s personally; her husband and fellow activist Wael Hamada was arrested last Thursday. According to Zaytouni, he hasn’t been heard from since and she says she moves locations every few days in an effort to evade suffering the same fate as her husband.

Despite the great personal danger she risks by talking to Western media and insisting that her real name be used, Zaytouni fights through the fear for a cause she says is bigger than her.

“It’s our moment to get our freedom,” she tells Cooper.