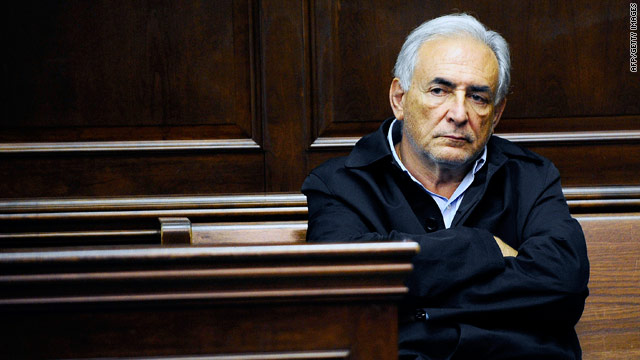 New York (CNN) - Former International Monetary Fund chief Dominique Strauss-Kahn was granted bail Thursday after being indicted on charges related to the alleged assault of a maid in his New York hotel Saturday.

"It's a great relief to the family to be able to have him with them," defense attorney Bill Taylor said to reporters outside the courtroom. He said his client would spend Thursday night at the jail on Rikers Island before being released Friday. The next court appearance, an arraignment, is slated for June 6.

Supreme Court Judge Michael Obus granted the bail on the condition that Strauss-Kahn post $1 million in cash, that he also post a bond for $5 million, that he surrender his travel documents and that he submit to home detention.

The announcement came shortly after his indictment on seven criminal charges was announced. They are: two counts of criminal sexual act, two counts of sexual abuse, and one count each of attempt to commit rape, unlawful imprisonment and forcible touching.

In the charge of criminal sexual act in the first degree, Strauss-Kahn is accused of having "engaged in oral sexual conduct with an individual ... by forcible compulsion," the indictment says.

"Under American law, these are extremely serious charges," Manhattan District Attorney Cyrus Vance told reporters outside the courtroom. "The defendant was indicted on all the charges presented to the grand jury," he said.

As he entered the courtroom for the bail hearing, he looked at his wife, seated in the front row, and smiled.