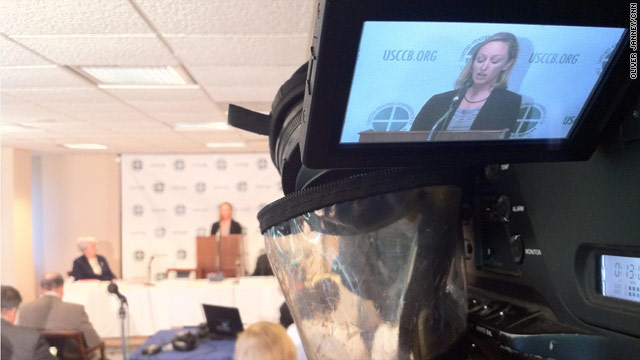 Karen Terry, the lead investigator from John Jay College, addresses the media regarding a new report on sexual abuse of minors by Catholic priests.
May 18th, 2011
03:00 PM ET

Washington (CNN) – "No single 'cause' of sexual abuse of minors by Catholic priests" was identified in a wide-ranging report released by the U.S. Conference of Catholic Bishops released Wednesday.

The report was presented by a group of researchers from John Jay College of Criminal Justice in New York and was commissioned by the bishops group after determining the need for an outside group to review not only the scope of the Catholic sexual abuse crisis in the United States but to try to determine the cause.

– Less than 5% of the priests who faced allegations were clinically diagnosed as pedophiles.

– Most priests who received treatment following allegations of abuse of a minor also reported sexual behavior with an adult.

– Researchers found no specific markers that would have been apparent across the board to disqualify candidates for the priesthood.

– Sexual orientation, specifically gayness, was not the cause of child sexual abuse by priests.

– The majority of abuse cases happened in the 1960s and 1970s and there was a sharp decline in the number of cases that began in the 1980s and continues today.

– Guidelines set up by the church to deal with the crisis when it came to light, including calling in civil authorities, were not adequately followed by most dioceses.

"The bad news is there is no test to give to seminarians to screen out abusers," said the Rev. Thomas Reese, a senior fellow at the Woodstock Theological Seminary at Georgetown University who read the report. "We're going to have to be vigilant. We're going to have to continue to have programs to educate both priests and clergy, but also for kids and parents so that the opportunities for abuse are severely restricted."