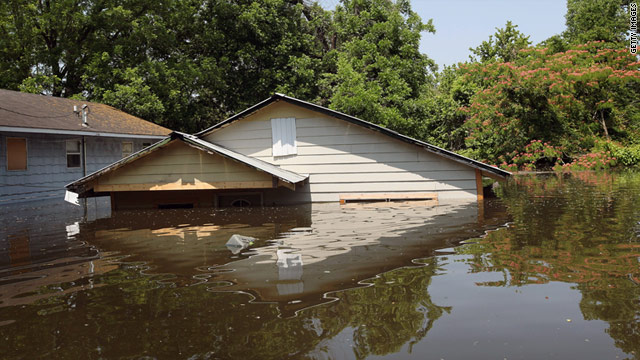 Water nearly covers a home Thursday in Vicksburg, Mississippi, where 600 residents had been evacuated as of Thursday night.
May 13th, 2011
07:49 PM ET

Jindal: Morganza Spillway could open within the next 24 hours

(CNN) - The U.S. Army Corps of Engineers could open the Morganza Spillway within the next 24 hours, Louisiana Gov. Bobby Jindal said Friday.

The Corps said it will operate the Morganza Spillway once river flows reach a certain trigger: 1.5 million cubic feet per second.

Opening the spillway would lower anticipated cresting levels along the lower Mississippi River and divert water from Baton Rouge and New Orleans but would flood much of low-lying south-central Louisiana.

The Mississippi River Commission has advised a "slow opening."

Louisiana state and local officials braced for the possibility of major flooding in the Atchafalaya River Basin when, or if, federal authorities open the spillway north of Baton Rouge.

The National Guard worked around the clock to construct a flood barrier in Morgan City, Louisiana, where the Atchafalaya River was already 3.15 feet above flood stage, according to the National Weather Service.