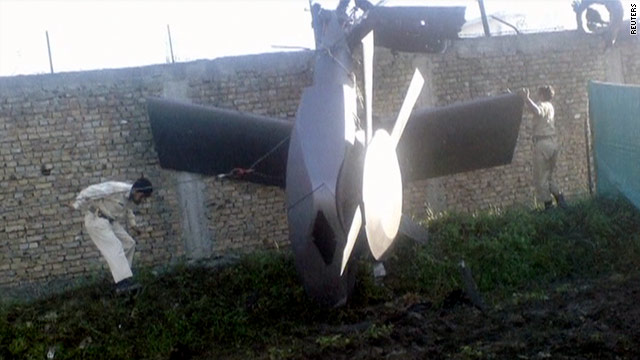 The Navy SEALs' helicopter tail rotor assembly came down on the other side of the compound wall.
May 10th, 2011
08:45 AM ET

Washington (CNN) - The one major problem for the Navy SEALs who killed Osama bin Laden was the crash of one of their helicopters.

It was no ordinary military chopper. Numerous aviation experts say they see several telltale signs of stealth technology in photos of what was left after the SEAL team tried to destroy the craft.

Some think it was a secret aircraft.

"Had this particular helicopter not crashed, we still would have no idea of its existence," said Gareth Jennings, the aviation desk editor for Jane's Defence Weekly.

Jennings and other aviation experts say the helicopter may have been a heavily modified version of the UH-60 Black Hawk, a mainstay of the military's helicopter fleet.

But it may include stealth technology developed for the now-canceled RAH-66 Comanche helicopter. That aircraft was designed to be an armed reconnaissance craft capable of carrying only two people.

Two of the aircraft were built for test flights before the Army canceled the program in 2004, not because of performance but because it needed money to upgrade existing helicopters. At the time, Les Brownlee, then acting secretary of the Army, said, "We will retain relevant technologies developed in the Comanche program."

At the same 2004 briefing about the cancellation of the Comanche, then-Army Chief of Staff Gen. Peter Schoomaker said, "much of what we've gained out of Comanche we can push forward into the tech base for future joint rotorcraft kinds of capabilities as we look further out."