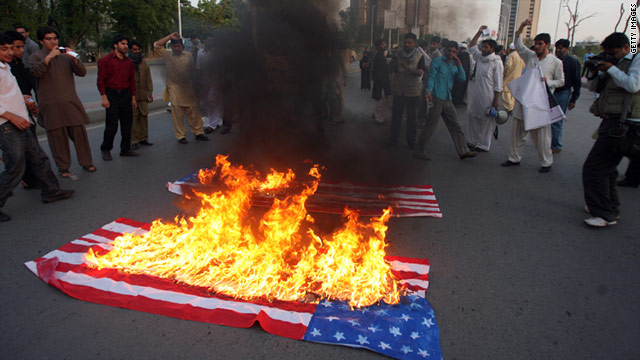 Pakistani Shiite students gather around burning U.S. flags during a protest in Islamabad on March 20.
May 2nd, 2011
12:45 PM ET

Analysis: Death may be turning point in U.S.-Pakistan relations

Editor's note: Since becoming CNN's State Department producer in 2000, Elise Labott has covered four secretaries of state and reported from more than 50 countries. Before joining CNN, she covered the United Nations. Follow her on Twitter at @eliselabottcnn.

Washington (CNN) - The death of Osama bin Laden could prove to be a turning point in United States-Pakistani counterterrorism cooperation. But whether it is for better or for worse remains to be seen.

Ties between the two countries were at their lowest point in years before Sunday's attack on the compound where bin Laden was believed to be hiding for close to a year.

Until recently, Pakistan offered tacit support for U.S. drone strikes in its tribal areas targeting al Qaeda and Taliban leaders. But the drone campaign, which was intensely unpopular among the Pakistani public, had increasingly become one of the main irritants in the relationship between the two countries.

Islamabad was still seething over a January incident in which CIA contractor Raymond Davis shot and killed two Pakistan men who he claimed were trying to rob him.

For its part, the U.S. has been frustrated over what it calls Pakistan's lukewarm action in going against extremists. Two weeks ago, Adm. Michael Mullen, chairman of the U.S. Joint Chiefs of Staff, said while in Pakistan that links between elements of the Pakistan Inter-Services Intelligence agency, or ISI, and Taliban factions in Afghanistan that target U.S. troops were straining relations.

On bin Laden, President Obama said Pakistan helped provide intelligence that led the U.S. to the terrorist leader and praised Pakistan for its "close counterterrorism cooperation" but said no other country, including Pakistan, knew about the operation in advance.

"Somehow it slipped from our radar and was picked up on theirs," the official said.