Editor's note: CNN's John King speaks with SarahBeth Harrison of Alabama about how her family survived a huge tornado. 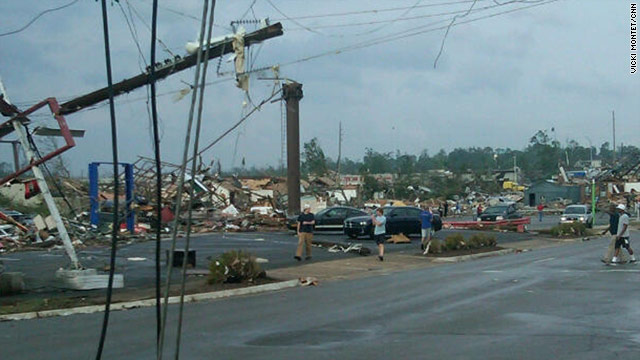 We're live across the South as people there come to grips with terrible devastation from some of the worst tornadoes in recent memory. Plus, the countdown to the royal wedding. Anderson is in London. We're just hours from the Prince William and Kate Middleton's nuptials.

Video: One royal not invited to the wedding

Editor's note: CNN's Randi Kaye reports on one member of the British royal family who was not invited to Prince William's wedding. 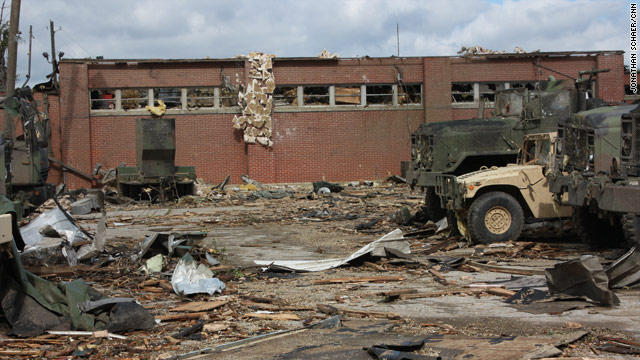 Some of the worst damage from Wednesday's tornadoes was in Tuscaloosa, Alabama.
April 28th, 2011
08:55 PM ET

Across parts of six southern states tonight there is extensive damage, and in some places total devastation from a series of tornadoes. At least 285 people are dead and nearly one million customers are without electricity.

Hardest hit is Alabama, where at least 198 people died.

There's a path of destruction up to seven miles long and a mile wide in Tuscaloosa.

"I don't know how anyone survived. It is an amazing scene," said Tuscaloosa Mayor Walter Maddox.

"There are parts of this city that I don't recognize. That's someone who has lived here his entire life," he added.

END_OF_DOCUMENT_TOKEN_TO_BE_REPLACED

Editor's note: CNN's Randi Kaye takes a look at what is planned for Friday's wedding between Prince William and Kate Middleton. 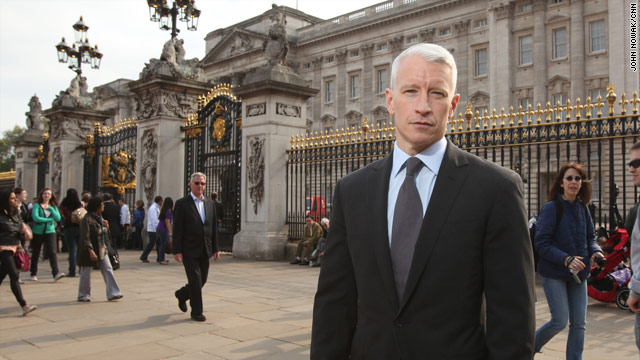 Letters to the President: #829 'In the tornadoes' wake'

Reporter's Note: The president is heading to the site of some of those massive storms.

I assumed the long awaited release of your so called “long form” birth certificate would be the subject of this letter today, but you’ll understand that the tornadoes which ripped through the South have taken over my thoughts.

I’ve probably told you that my whole family lives in Alabama, and we feel rather fortunate that we lost no one. My niece, who attends the University of Alabama, apparently came quite close to being seriously hurt; she was hunkered down in a house as the storm swept past, hearing the windows blow out. I have not spoken with her, yet I’m told she has some glass in her arm, a nasty bruise on one leg, and her car was trashed. But frankly, we’ll take the minor injuries as a blessing since so many families lost loved ones, or their homes. I know they will be trying to recover for a very long time. Alabama is a beautiful state filled with lovely, resilient people; but they need help now.

I have been to many terrible storms over the years, seen the explosive damage of tornadoes many times, and yet it is still heart breaking and awe-inspiring.
END_OF_DOCUMENT_TOKEN_TO_BE_REPLACED

Southern storms: 'I don't know how anyone survived'

A breakdown provided by Alabama Gov. Robert Bentley's office showed that violent weather claimed lives in 16 Alabama counties. Thirty-five people perished in DeKalbCounty in northeastern Alabama; the death toll in the hard-hit city of Tuscaloosa, in west-central Alabama, was at 36 as of Thursday morning, said Mayor Walter Maddox.

"I don't know how anyone survived," Maddox said. "We're used to tornadoes here in Tuscaloosa. It's part of growing up. But when you look at the path of destruction that's likely 5 to 7 miles long in an area half a mile to a mile wide ... it's an amazing scene. There's parts of the city I don't recognize, and that's someone that's lived here his entire life."

Entire neighborhoods were leveled and hundreds of thousands of people were without power in the affected regions. As of 10 a.m. (11 a.m. ET), Alabama Power said nearly 348,500 customers had no electricity. As of Thursday morning, about 61,000 people in Georgia were without power, according to Georgia Power and the Georgia Electric Membership Corp. Bentley estimated as many as half a million to a million people had no electricity in Alabama.

"This could be one of the most devastating tornado outbreaks in the nation's history by the time it's over," CNN Meteorologist Sean Morris said.

(CNN) - Friday's nuptials between Prince William and Kate Middleton won't be the first royal wedding to captivate Anglophiles from around the world. But it will be the first with its own Twitter hashtag.

The wedding's full-bore digital presence - from live-streaming video to mobile apps - casts a light on a royal family that, for the past century, has needed to, sometimes reluctantly, stay on the cutting edge of communications technology.

There were even plans to broadcast Friday's wedding in 3D, although they were eventually scrapped due to a perceived lack of interest and access.

"The Royal Family has embraced social media in its own time, which is typical of how a basically conservative institution has learned to adapt," said Charlie Beckett, director of a journalism and society think tank at the London School of Economics.

That adapting has taken multiple forms over the years for a family that's increasingly had to justify its relevance, and the money British taxpayers fork over to help maintain their lavish lifestyle.

"The success of the royal family over the last 100 years is that they have always adapted very quickly to an ever-changing society," said Mark Saunders, a royal biographer and contributor to CNN's royal wedding coverage. 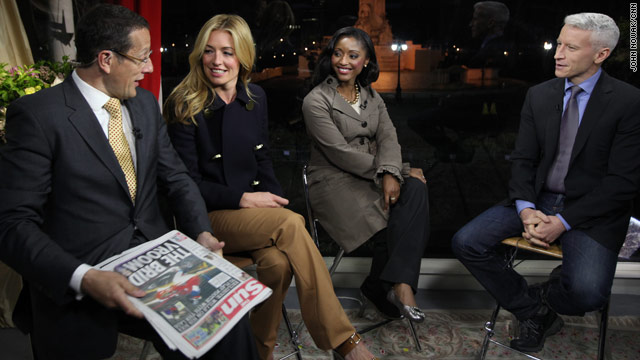