Letters to the President: #831 'Digging out'

Reporter's Note: The president is extending condolences and support to all the towns hit by that string of tornadoes in the South. So am I.

Happy Saturday! You’ve had quite a busy week, and I must say that I did, too. It is nice to wake up to a relatively quiet day and know that I have a little recovery time before firing up the old grindstone again.

That said, I am mindful of how many people in the path of those awful storms woke up to just another day of hard work. That is one of the great challenges of catastrophes; there is just no break. You can’t call in sick, or take a vacation from digging out of rubble. You can’t tell your heart to quit aching. So my thoughts are certainly with them.

My brother, niece and nephew were up in Tuscaloosa helping with some cleanup this week. Some other family members are too, if I heard right. Not sure where they are now; I think back home in south Alabama. My nephew graduated from the University of Alabama, and my niece is still attending (as I told you, she was hunkered down in a house right next to the main path of destruction) so the whole thing has been rather personal for them.

And come to think of it, that’s another thing that makes such calamities hard to bear. Even though such storms are mindless, know no address, and run simply because they can, what they take from people is utterly wrapped in emotions, thoughts, and memories.
END_OF_DOCUMENT_TOKEN_TO_BE_REPLACED

Editor's note: AC360° takes a look back at the most memorable moments of Friday's royal wedding.

Editor's note: CNN's Isha Sesay reports on the moments from Friday's royal wedding that you may have missed.

Pres. Obama visit the tornado ravaged city of Tuscaloosa, Alabama. The death toll has risen there and hundreds are unaccounted for. We'll have the latest. Plus, it was an extraordinary day in London, and they're still celebrating the royal wedding. We'll have moments you might have missed. 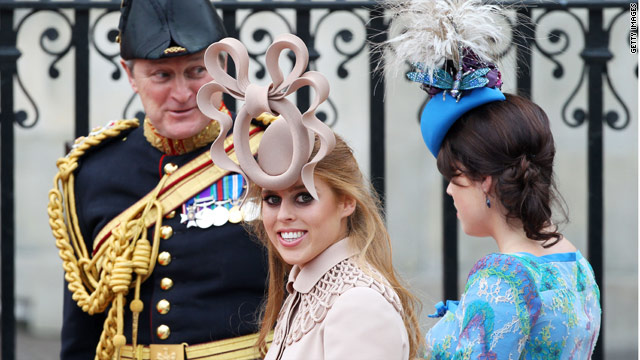 Staff
Kathryn Leonard
"Can you believe it?! Someone actually threw this away!!"

Viewer
Roger C.
"Ugh, she got out again. Hey Mindy, get the net!"

Reporter's Note: The president went to the tornado zone in Alabama, and to NASA in Florida. So my letter, once again, is going to the Oval Office.

It was good to see you on the ground there in Alabama today. Not sure if you had a chance to read yesterday’s letter, but I noticed that you (as I suggested) focused a good bit on encouraging local officials in their long struggle ahead. Good for you.

I continue to be awed and depressed by the scope of the damage there and in other states, even as I know that Southerners are tough folks who will dig themselves out, build up again, and move on despite their sorrows. Still, it was good of you to stop by.

As for Florida: Sorry that the space shuttle did not lift off for you, but glad you made it down there, too.

That said, I am a little conflicted when I see you cooling out with the astronauts. On one hand, I know that a presidential visit always attracts attention to any agency or cause, and spurs public interest in what that group is doing. On the other hand, I’m not convinced that you are much of a friend to the space program.
END_OF_DOCUMENT_TOKEN_TO_BE_REPLACED

Tuscaloosa, Alabama (CNN) - President Barack Obama toured rubble-strewn Tuscaloosa, Arizona, neighborhoods on Friday, declaring the devastation brought by a series of powerful storms and tornadoes was beyond anything he had ever seen.

"We're going to do everything we can to help these communities rebuild," he said.

Obama's motorcade passed street after street of homes reduced to splinters, crushed and flipped cars, and widespread debris on the way to his first stop to visit with families affected by the storms that pounded the region Wednesday and Thursday.

The president's visit took place as emergency responders in Alabama and five other states continued to assess the damage wreaked by one of the worst outbreaks of violent weather in the southeastern United States in decades, experts said. The storms leveled neighborhoods, rendered major roads impassable and left at least 800,000 customers without power Friday afternoon.

Alabama suffered the greatest of loss of life, with fatalities in 19 counties confirmed by the state Emergency Management Agency. The agency reported Friday afternoon that the state's death toll had risen to at least 228 after the confirmation of 18 additional deaths in Marion County. That brought the total number of fatalities in that county to 21.

William and Catherine marry in royal wedding at Westminster Abbey

London (CNN) - Prince William of Wales slipped a gold ring onto the finger of Catherine Middleton Friday, and the couple vowed to love, comfort, honor and to keep each other in London's biggest royal wedding in three decades.

Bells pealed over central London and flag-waving crowds roared in excitement Friday as Middleton arrived at Westminster Abbey to marry William, the second in line to the British throne.

Middleton wore an ivory and white satin dress with lace sleeves and shoulders, designed by Sarah Burton of the Alexander McQueen fashion house.

"You look beautiful," the prince told her as she arrived at the altar on the arm of her father Michael.