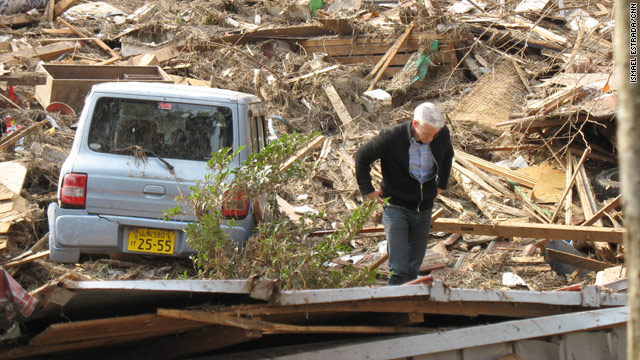 What once were people’s homes is now just a pile of rubble. We found clothes, dolls, wedding albums and countless cars as far as we could see. (Photo Credit: Ismael Estrada/CNN)
March 14th, 2011
12:00 PM ET

Producer's Notebook: On the road to Sendai

Editor’s note: AC360° Producer Ismael Estrada is traveling in Japan with Anderson Cooper and CNN photojournalist Neil Hallsworth. Tune in to AC360° beginning at 10pm ET to get the latest from Japan.

(CNN) - On our way up to Sendai, Japan, we passed dozens upon dozens of vehicles lining village streets. People were lining up for blocks waiting for fuel from gas stations that were selling what little they had remaining. Hundreds of residents were lining up waiting for grocery stores to open - stores that were sold out of water and many necessary food items.

Once we made our way into the seaside city of Sendai the wreckage left in the wake of the tsunami was overwhelming. Vehicles were tossed all over mud-filled streets. Some cars were inside buildings that only a few days ago were open for business.

As we drove closer to residential areas we couldn’t believe the destruction in front of us. Anderson, photojournalist Neil Hallsworth and I made our way into the wreckage - what once were people’s homes is now just a pile of rubble. We found clothes, dolls, wedding albums and countless cars as far as we could see. Homes were literally ripped apart and tossed aside.

As we were in the middle of all the rubble it was hard to imagine that, at one time, this was a place people here called home.