Tonight, breaking news from Northeastern Japan as the full extent of the devastation from a massive earthquake and tsunami becomes clear. Plus, an update from our correspondents on the ground in Libya.

Ras Lanuf, Libya (CNN) - The military forces of Moammar Gadhafi on Friday pounded Ras Lanuf, the key oil port once in the hands of rebel forces, with its leadership confidently vowing to retake all territory from the opposition despite growing international pressure.

Even as it targeted its domestic enemies, the Tripoli government continued to parry with leaders around the globe.

Deputy Foreign Minister Khaled Kaim, for instance, said Friday that Libya has suspended diplomatic relations with France, one day after the French government recognized the newly created Libyan opposition movement as the sole representative of the country.

In Ras Lanuf, pro-Gadhafi forces cranked up an intense and steady bombardment of the city, believed to be by rocket, artillery and tank fire. A storage tank at an oil refinery was on fire after an air raid there.

"We saw a bomb fall about a kilometer to the southwest of the refinery, and moments later saw thick black smoke rising from the refinery. We don't know, and no one we spoke to could say with any level of certainty or veracity, what caused the fire," said CNN Correspondent Ben Wedeman.

Dozens of pickup trucks and cars belonging to the opposition were heading away from the city amid fear that Libyan forces were advancing as the bombardment continued. The rebels evacuated to a checkpoint outside the town, but that and other rebel positions also were targeted by airstrikes.

Rebels said the eastern city has been essentially empty as civilians fled and opposition forces retreated from sustained attacks. On Thursday, state media said the town was "cleansed" of the fighters.

This reflects the turn in fortunes for Gadhafi's well-equipped military, which has gained an upper hand after rebel fighters seized ground across Libya.

Along with its offensive in Ras Lanuf, government soldiers beat back rebels Thursday in Zawiya east of the capital, Tripoli. 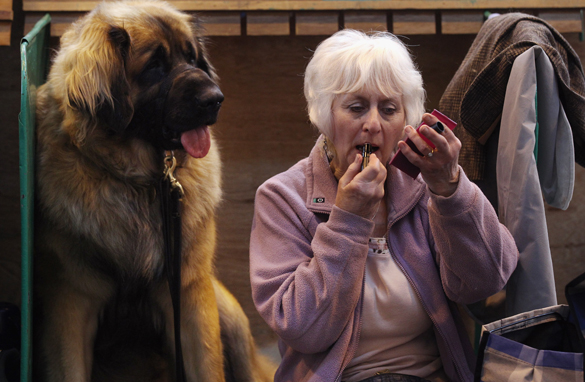 A leonberger dog looks on as its owner applies lipstick in the stalls on the second day of the annual Crufts dog show at the National Exhibition Centre on March 11, 2011 in Birmingham, England. (Photo credit: Oli Scarff/Getty Images)

Staff
Nick Valencia
"The cougar has a dog in this fight."

Related: After the quakes, are Japan's nuclear plants safe?

Tokyo (CNN) - The morning after Japan was struck by the most powerful earthquake to hit the island nation in recorded history and the tsunami it unleashed - and even as the earth continued to twitch with aftershocks - the disaster's massive impact was only beginning to be revealed.

Hundreds of people died in the 8.9-magnitude temblor, which was centered near the east coast of Japan. The massive movement caused the formation of 30-foot walls of water that swept across rice fields, engulfed entire towns, dragged houses onto highways, and tossed cars and boats like toys. Some waves reached six miles (10 kilometers) inland in Miyagi Prefecture on Japan's east coast.

Buildings collapsed by the score, and numerous fires were ignited.

The quake, which struck at 2:46 p.m. (12:46 a.m. ET), prompted the U.S. National Weather Service to issue tsunami warnings for at least 50 countries and territories.

The epicenter of the main quake Friday was off Miyagi Prefecture, about 230 miles (370 kilometers) northeast of Tokyo, the U.S. Geological Survey said.

Video: Moment of the Japan quake

Related: How a tsunami can strike within minutes

Letters to the President: #781 'Oklahoma City is more than OK'

Have you been to Oklahoma City lately? I know you travel a lot, but I can’t recall if I have seen you here. I told you that I was headed this way yesterday, but I must admit I had no idea what I was in for.

Now, I made my first trip to Oklahoma City about 26 years ago, and back then it was just a relatively uninspiring western town. Tidy. Busy enough. I recall a big, abstract sculpture downtown and a great rock and roll radio station. (Called something like The Cat?) I heard the Dire Straits song “Money for Nothing,” for the first time as I passed through OKC. But beyond that, the town did not strike me as remarkable.

How times have changed.
END_OF_DOCUMENT_TOKEN_TO_BE_REPLACED