Video: What happens to Libya after Gadhafi?

Related: Gadhafi clings to power amid growing support for protests

Separating Facts from Fiction in Libya: Join the Live Chat

Libyan leader Moammar Gadhafi faced reporters today and spun a story of what he says is happening in Libya. It's the same story his son, Saif,  has been trying to sell the world for days now. Tonight on 360° you will hear what they say is happening and then you will hear the facts of what is happening. We have the facts and evidence.

Libyan leader Moammar Gadhafi denied today that there are protests threatening to end his 41-year rule. Gadhafi also denied using force against his people. His message doesn't match the video were seeing from Libya or the eyewitness accounts. The truth is ordinary people are taking to the streets calling for change and risking their lives to speak out.

You don't hear any of that from Gadhafi.

"They love me, all my people with me, they love me all. They will die to protect me, my people," he said in a joint interview with ABC News and the BBC.

Tonight on 360°, we'll show you the images that prove that a lot of people in Libya actually hate him.

For two weeks, government forces have repeatedly clashed with demonstrators. At least 1,000 people have been killed in the clashes, according to a U.N. estimate.

"When he can laugh talking to American and international journalists while he is slaughtering his own people, it only underscores how unfit he is to lead and how disconnected he is from reality," she said.

Tonight on 360°, we'll look at the growing pressure put on Gadhafi to step down. The United States is freezing at least $30 billion in Libyan government assets and the U.S. Navy is moving warships closer to Libya. There's also talk of a possible no-fly zone. Will any of that push Gadhafi to give up his power? What other options are there? We'll talk it over with former Deputy Secretary of Defense Paul Wolfowitz and former NATO Supreme Allied Commander Gen. Wesley Clark.

There's also questions on who would fill the void if Gadhafi falls. The anti-government rebels and protesters are a diverse group, with different trial ties. There isn't a unified front on what would happen if they win their battle. We'll look at this angle with former CIA officer Bob Baer, who's also an intelligence columnist for TIME.com and Professor Fouad Ajami at John Hopkins School of Advanced International Studies.

Join us for these stories and much more starting at 10 p.m. ET. See you then.

Gadhafi clings to power amid growing support for protests

In a joint interview with ABC News' Christiane Amanpour and the BBC, Gadhafi also denied using force against his people, Amanpour reported. Excerpts of the interview were posted on the networks' websites.

"No demonstration at all in the streets," he said, speaking at a restaurant in Tripoli.

Told by the BBC's Jeremy Bowen that he had seen demonstrators in the streets that morning, Gadhafi asked, "Are they supporting us?"

"They love me, all my people with me, they love me all. They will die to protect me, my people," he said.

Government forces have repeatedly clashed with demonstrators over the past two weeks in Libya, fired on crowds and at times shot indiscriminately at people in the streets, numerous witnesses have told CNN. The death toll has topped 1,000, according to an estimate from U.N. Secretary-General Ban Ki-moon.

Gadhafi's regime has lost control of parts of the country to rebel forces, and with each passing day more Libyan officials around the world have defected, joining calls for his ouster. 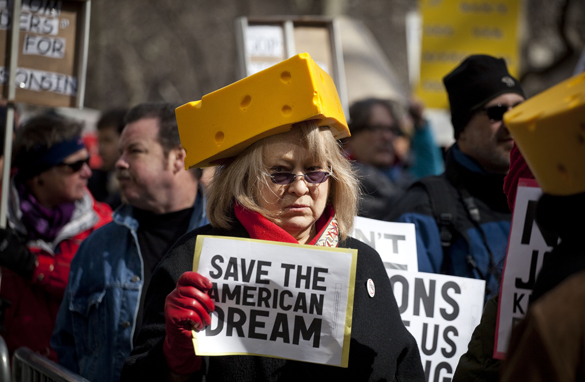 Demonstrators rally in front of City Hall in solidarity with union workers across the country on February 26, 2011 in New York City. (Photo credit: Michael Nagle/Getty Images)

Staff
Kat Kinsman
“Talk about your wedge issues! If this all melts down, I guess we’ll be in some pretty deep fondue."