Cooper on interviewing Lady Gaga: 'She came to play' 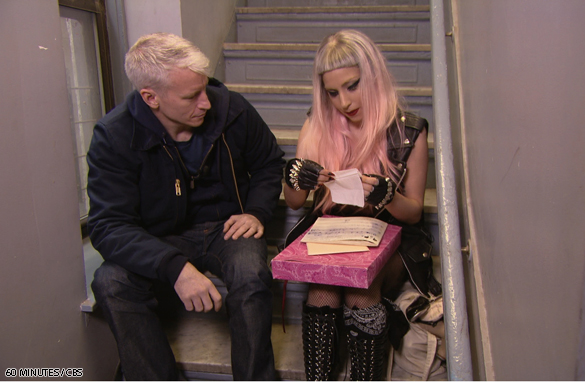 "She talked about being very insecure," Anderson Cooper says of his "60 Minutes" interview with recording artist Lady Gaga, "But I think she always kind of felt she was meant to be a superstar." (Photo Credit: 60 Minutes/CBS)

What’s the most surprising thing you learned about Lady Gaga?

Cooper: I was surprised by how in control she is and how savvy she is about her own career. She’s 24 years old but she really has thought this out and is able to kind of execute her vision for herself in a way that’s very consistent. She says she art directs every moment of her life and I can’t imagine the amount of energy that requires. It must be exhausting but she’s been incredibly successful with it.

From your perspective of having reported on her and traveled with her, what do you think that vision is?

Cooper: Well, I think she views herself not just a recording artist but as a performance artist. And the clothes and the wigs and the outfits, it’s very thought out and it’s designed to get people talking, designed to make headlines and designed to make statements about politics or fashion or other commentaries that she wants. But it’s also designed in a way to direct people’s attention towards what she wants people to pay attention to which is her artistry and her music and not towards the kinds of things that a lot people focus on with celebrities like who they’re dating. And she’s able to kind of direct attention to her artistry and maintain it there. And it’s a very clever and interesting way she’s doing it.

But wasn’t she very candid with you about the remaking of her persona and the person she used to be and sometimes still is? She talked about being very insecure, right?

Cooper: Yes, she talked about being very insecure. But I think she always kind of felt she was meant to be a superstar. And from age four [she] was taking piano lessons and dance lessons and always had a vision for herself. She talked a lot about how taking the name “Lady Gaga” kind of allowed her to free herself of insecurities and transform herself into the superstar that she felt she was always meant to be.

Cooper: Yes, she was amazing to give us so much time. . . . There were a lot of great moments. . . . There are great moments – just being in the recording studio with her. She wanted to play us her album “Born This Way.” So she played us about half of the new songs that will be coming out in the next couple months. And, to hear the songs this far in advance. . . . Literally, when she’s listening in the recording studio, she’s dancing and singing along . . . . And to see her with the friends that she travels with and the people she has known for a long time – and just how she is. One of the things I like about her is that there’s no difference between who she is on camera and who she is in real life.

Cooper: Well, I don’t think that she’s always performing. I think she’s actually always very honest about who and what she is. I think there are a lot of celebrities who put on a performance on camera. She doesn’t do that. She’s remarkably candid about everything in her life. And, in a way, by doing that, and art directing her life, it allows her to kind of maintain a certain privacy in a strange way. It’s an interesting kind of dance that she’s doing.

Is it difficult to interview someone who’s not wearing pants?

Cooper: Yes, that was interesting. You never knew how she was going to show up. It actually made it difficult to put the piece together, to write the story. Because you ended up having to kind of write it in a linear way because she looked completely different every time we met her. So, you sort had to explain to viewers: “And she’s transformed herself yet again.”

Compared to some of your other recent high-profile interviews, was Lady Gaga harder to book or harder to nail down once you had her in the interview chair?

Cooper: A lot of people are hard to book. She’s definitely hard to book. I just interviewed Eminem. He’s tough to book as well. But, she came to play. There’s some people who you book and are still kind of reluctant and don’t give you much time. She was amazing. She was fully on board and plunged head first in.