Video: Fact vs. fiction about the Muslim Brotherhood

Related: 'We are not seeking power,' Muslim Brotherhood says

Video: The truth about Egypt's lies

KFC and the other Lies in Egypt: Join the Live Chat

There are lies after lies being spread by the Mubarak regime in Egypt. We're 'Keeping Them Honest.'
Some of the allegations being spread about protesters in Liberation Square are almost comical. There are false reports they are being paid $100, or a 100 euros or being fed Kentucky Fried Chicken. Yes, KFC.

In a sign of increasing tension between the United States and Egypt over the demonstrations that began January 25, Egypt's foreign minister said in a U.S. television interview that the Obama administration should back off from pushing President Hosni Mubarak to speed up the reform process.

"When you speak about prompt, immediate, now," Foreign Minister Ahmed Aboul Gheit told PBS "Newshour," it is "as if you are imposing on a great country like Egypt, a great friend that has always maintained the best of relationship with the United States, you are imposing your will on him."

Aboul Gheit said the U.S. government should "better understand the Egyptian sensitivities and better encourage the Egyptians to move forward and to do what is required - that is my advice to you." 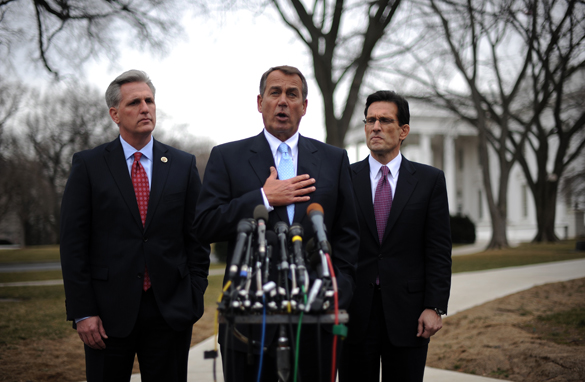 Viewer
Nancy S. – NJ
"Ok, ok I confess. We smoked cigarettes. Biden dropped F bombs. On the bright side, Michelle Obama made us eat our vegetables."

Lohan faces a February 23 hearing on the alleged probation violation before Superior Court Judge Keith Schwartz, who could send her back to jail.

The actress pleaded not guilty to the theft of a necklace allegedly taken from a California jewelry store last month.

Schwartz revoked Lohan's probation in a 2007 drunken driving case. He issued a $20,000 bond for the theft charge and an additional $20,000 bond in the probation revocation.

At her arraignment, Schwartz warned Lohan that she could be put back in jail if she violates the law.

"Please don't push your luck, I am telling you, the judge said. "Things will be different."

Spokesman: Giffords recovering part of her ability to speak

(CNN) - U.S. Representative Gabrielle Giffords, recovering from a gunshot wound to the head sustained January 8, is regaining part of her ability to speak, her spokesman said Wednesday.

C.J. Karamargin would not divulge what Giffords has said, other than saying she asked for toast.

Giffords is at TIRR Memorial Hermann rehabilitation hospital in Houston. She was moved there late last month from University Medical Center in Tucson, Arizona, where she was taken after the shooting at a "Congress on Your Corner" event at a Tucson supermarket.

Wael Ghonim: Negotiation days with Mubarak are over

Cairo, Egypt (CNN) - Wael Ghonim, the Egyptian activist being hailed by many fellow protesters as a hero, had a message Wednesday for his country's leaders: "If you are true Egyptians, if you are heroic Egyptians, it's time to step down."

In an exclusive interview with CNN, Ghonim, who was freed by Egyptian authorities on Monday after 10 days, said it is "no longer the time to negotiate" with the regime of Egyptian President Hosni Mubarak.

"There's a lot of blood now" that has been spilled, he said. It's time for people at the highest levels of the government "to apologize to the families" of those killed, he said.

Human Rights Watch said Tuesday the number of people killed in the Egyptian protests has reached 302 - 232 in Cairo, 52 in Alexandria and 18 in Suez.

Ghonim played a key role in organizing the protests that have convulsed Egypt for more than two weeks. He was the administrator of a Facebook page that is widely credited with calling the first protest January 25. A Google executive who lives in Dubai with his wife and two children, he had returned to Egypt for the protests.

Muslim Brotherhood: 'We are not seeking power'

Cairo, Egypt (CNN) - Keeping with the low-profile it has adopted in Egypt's uprising, the Muslim Brotherhood said Wednesday it wants to promote democracy but does not intend to field a candidate for president.

The Islamist umbrella group also sought to dispel fears that it would push for an Islamic state in a post-Hosni Mubarak era.

But fears that the Muslim Brotherhood could hijack Egypt's pro-democracy movement is real. It has been expressed by foes of President Mubarak like businessman Naguib Sawiris, part of the self-proclaimed Council of the Wise, as well as Mubarak's allies abroad, including the United States.

The concerns were perhaps compounded by last week's remarks from Iran's Ayatollah Ali Khameni, who referred to the revolts in Egypt and other regional nations as the "Islamic awakening."

But Katatny said the Brotherhood was not responsible for statements made by others.