Tonight on 360°, accusations that a company is selling bogus 10th anniversary 9/11 commemorative coins. We're Keeping Them Honest. Plus the uproar over a theme park planned in Kentucky that will feature a full-size Noah's Ark. The state is reportedly giving tax breaks. The governor says it will create much needed jobs, but critics want to know where is the separation of church and state. Plus, tonight's other headlines.

Video: Bullying: What parents can do 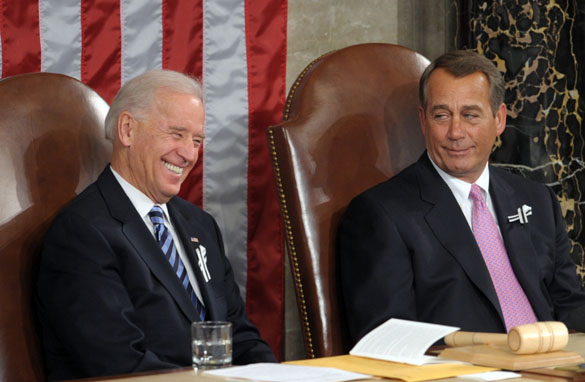 Staff
Steve Brusk
"Laugh all you want, my wife said she loved this tie."

Letters to the President #737 'The morning after'

Reporter's Note: President Obama gave his State of the Union address last night. I, however, am sending today’s letter to his Pennsylvania Avenue address. Ha!

Well, anyone who is interested in the news knows how you spent last evening, giving the big speech and all. I hope you are happy enough with the reviews today. I suspect that even the most confident president still wonders a bit how his message will go over. So that said, I thought I’d tell you what I did yesterday.

I started with a nice run through Central Park. My hotel is only a couple blocks off of the park on the west side, and it was so cold the night before that I just dreaded the trek to the trails this morning. It didn’t help that when I looked out the window I saw huge, swirling snowflakes flying everywhere. Nonetheless I strapped on my shoes, pulled on my hat and gloves, and ventured forth.

Much to my delight, it really didn’t feel cold at all. The park was beautifully draped in white, and for all five miles on my route I saw scads of people and their dogs out enjoying the weather. Sure it was gray, but the white flakes made everything beautiful. Well, everything except the wheezing of my lungs which is never pretty.

I ran down through the zoo and saw the sea lions lolling about and swimming despite the chilly air. I caught a runaway puppy that was heading toward traffic and handed it back to the owner who had been chasing after it but slipping too much to catch up. By the time I was back at the hotel I was covered with snow and had to brush it off my arms and legs to keep from dripping all the way to my room.

I had a lovely breakfast at my favorite little corner joint near our office and then came in for a nice day of work. Big events such as State of the Union speeches are always kind of fun because they bring so many journalists into the same place and we all get to visit a bit, which our schedules don’t often permit.

Oh and one more thing. As I was riding the elevator at my hotel, I turned to look at the only other passenger, and it was Mitt Romney. He and I chatted about the weather and running, although he didn’t give me any hints about whether he’ll be running against you next year. Ha! Anyway, congrats again on the big speech. You didn’t try to call right afterward, did you? I was tied up at the office for quite a while and thought I heard my phone ringing, but could not get to it.