Congresswoman Michele Bachmann is preparing for a rebuttal to Pres. Obama's State of the Union speech tomorrow night. She'll speak on behalf of the Tea Party caucus. But it's another speech she gave on Friday that has a lot of people talking, where she flubbed the facts on U.S. History. We're Keeping Them Honest. Plus, see why the folks behind the hit TV show "Mad Men" are being added to our 'RidicuList'. 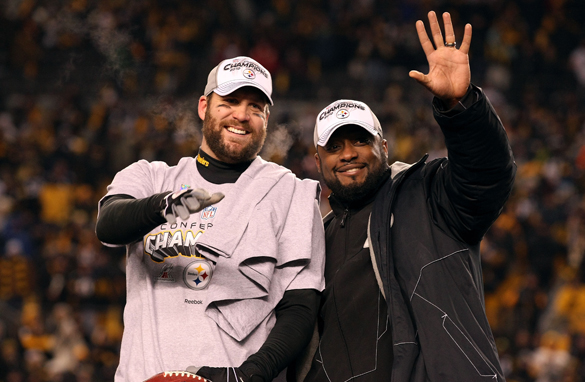 Ben Roethlisberger #7 and head coach Mike Tomlin of the Pittsburgh Steelers celebrate their 24 to 19 win over the New York Jets in the 2011 AFC Championship game at Heinz Field on January 23, 2011 in Pittsburgh, Pennsylvania. (Photo credit:Al Bello/Getty Images)

Staff
Joey Gardner
“So long suckas! Tell Jay-Z and Alicia Keys they’ll have next Sunday off too.”

Reporter's Note: President Obama has talked about cooperation since the Republicans took back the House. As I note in today’s letter, however, calling for cooperation in DC is like calling for more cowbell. More doesn’t seem to matter; you either have it or you don’t.

Sorry to see what happened to your Bears. They looked like they had a real chance there near the end, but Green Bay just had a bit more muscle, I'm afraid. So i guess you won't be going to the Super Bowl now. Trust me, if I were President I'd go to the big game whether my team made it or not. Seriously, you know you'd have great seats. They'd probably even let you flip the coin or sing the national anthem or something.

Oh well, I know you have other games on your mind.

I was noticing, for example, these headlines about a new storm brewing over the deficit. In a nutshell, the Repubs are going to push for spending cuts to bring the deficit under control, and your Dems are going to argue that the economy is still far too fragile to risk such maneuvers.

To be honest, the first thing I thought when I head about this was, "business as usual.". People often caution against buying into stereotypes about different people and groups, yet I have often found that stereotypes come into being because they are grounded in some sort of truth. And when I look at this, it certainly seems that way. Once again the Dems seem to think that government spending is the solution; once again the Repubs seem to think it is the problem.

Almost certainly the truth lies somewhere in the middle. Everything I read about the economy that seems fully reasoned suggests that we may have to work our way through delicately balanced equation for quite some time; we may well end up paying more in taxes, and we may well get less in return. We'll have to hold onto a deficit for while as we try to stabilize things, but then again, we can't afford to hang onto it too long or let it grow too big, for fear of creating a runaway train.

Anyway, it's just kind of depressing. For all of that talk from both major parties about cooperation, and working together, I just don't see many signs of it. I see a lot of finger pointing; a lot of scape goating; but not much that gives me faith we'll see much progress.

So that's about it for this Monday. Had an excellent 13 mile run yesterday. Passed several dozen folks playing hockey on the frozen canal. You should have been there. Shall we bet on the Super Bowl, now that we know who is in? I'm inclined to think the Packers have the edge, but if you want them, I'll take the Steelers. Let me know.