Tonight we have breaking news out of Tuscon, Arizona where we've learned new details on Rep. Gabrielle Giffords recovery. Dr. Sanjay Gupta and Elizabeth Cohen will have the details. Plus, inside a cold case in New Mexico. Four people killed 21-years-ago  at a bowling alley, some of them children. We'll talk with John Walsh, Host of "America's Most Wanted." 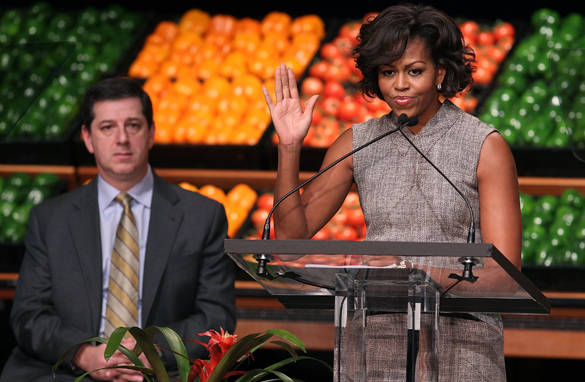 First lady Michelle Obama is flanked by Bill Simon, president and CEO of Walmart U.S., while speaking about food availability and affordability during a news conference, on January 20, 2011 in Washington, DC. (Photo credit: Mark Wilson/Getty Images)

Staff
Sam Meyer
“As God is my witness, I thought arugula could fly.”

Viewer
Leigh Grant, Kitchener, On. Canada
“I swear to tell the fruit, the whole fruit and nothing but the fruit, so help me god.”

(CNN) - "They shot me five times," says a desperate 12-year-old Melissia Repass in a call to 911. "Just hang on, take a deep breath," says the dispatcher. "How many people are hurt?"

"The people that did it shot her point blank. I mean they were looking at her when they shot her," said Audrey Teran, Valarie's mother. "I know they see her eyes. I know whoever did this can't get these eyes out of their head."

"When they shot me in the head, it was the loudest noise I ever heard," Holguin says. "I thought my head had exploded. I was soaked with blood."

Despite gunshot wounds to their heads, the survivors were able to provide detectives a detailed description of their killers, who took between $4,000 and $5,000 in cash.

Officers set up road blocks on all highways leading out of Las Cruces. Yet the killers escaped, and have avoided justice for nearly 21 years.
END_OF_DOCUMENT_TOKEN_TO_BE_REPLACED

Los Angeles (CNN) - Ricky Gervais isn't worried that his cutting humor at Sunday's Golden Globes made anyone dislike him, because he was just doing his job.

"I don't care what people think of me," Gervais said in an interview airing Thursday on CNN's "Piers Morgan Tonight." "I care if I've done a good job, and I care if I've told the truth."

Gervais' jokes targeted many of Hollywood's biggest stars and the group that hired him to host the awards show for a second year.

"They hired me for a job and if they didn't want me, they shouldn't have hired me," Gervais said.

His job as comedian is to give people a release, he said.

"Comedy is laughing in the face of adversity," he said. "We use comedy as a sword, a shield, as a medicine, as a getting to know you. It's fundamental. It's a fundamental we understand comedy and we have humor, because it's built on empathy, and that's what being human is."

The British comedian told Morgan he was just "confronting the elephant in the room" with one-liners about the bad movies and bad behavior of the actors sitting in front of him.

Video: Cuts leave man with no funds for a heart

Letters to the President: #731 'Negotiating'

Reporter's Note: President Obama’s been really busy entertaining the Chinese president, so I don’t know if he’s had time to read my letters lately. Or…uh…ever, for that matter.

It seems as if the big state dinner went well enough last night. Congratulations on that. I must say that I rarely pay much attention to things such as the first lady’s attire, but her gown last night was really quite smashing.

From a distance, however, I can’t really say that I know how things are going in the overall visit. It seems to me that the problem with these high level visits is often the delicate balance between playing nice and playing tough. Truth told, we need to do both.
END_OF_DOCUMENT_TOKEN_TO_BE_REPLACED

(CNN) – Rep. Steve Cohen, the Tennessee Democrat who compared Republican efforts to criticize health care to the works of a famous Nazi propagandist, is standing by his heated rhetoric on the House Floor Tuesday night.

But in an interview with CNN's John King, Cohen said he was not directly comparing Republicans to Nazis, but rather merely suggesting they are employing the same techniques of that of infamous Nazi propagandist Joseph Goebbels.

"I didn't compare the Republicans to Nazis," Cohen told CNN Wednesday. "Goebbels was the master of political propaganda. He said repeat it. Make it short. Make it simple and repeat it over and over. And that's what they've done. It's not a – you just heard [Minnesota Republican Rep.] Michele Bachmann call it socialistic. That's just – they're lies."

In his interview with CNN, Cohen insists the press has blown his comments out of proportion.

"Some have in the press…seem to want to jump on anything," he said, adding later, "I think that people are looking for something. I think the press was hypersensitive. Certainly I didn't intend to do that, but the way they lied has been the same way that the master political propagandist of all time Goebbels said to lie."

Also speaking on Anderson Copper 360 Wednesday, Cohen said he wouldn't make the comparison again but declared, "I was right."

Related: Tip could be 'crucial' lead in Cherrie Mahan case