The Secure Border Initiative-network, a high-tech surveillance system to reduce border smuggling, so far has cost taxpayers almost $1 billion for two regions in Arizona, covering 53 miles overall on the 2,000-mile border, according to a Homeland Security report.

Napolitano announced "a new path forward for security technology" along the border that is tailored to the needs of each region and provides "faster deployment of technology, better coverage and a more effective balance between cost and capability," she said in a prepared statement.

"There is no 'one-size-fits-all' solution to meet our border technology needs," Napolitano said about her decision to end the problem-plagued virtual fence.

"Where appropriate, this plan will also incorporate already existing elements of the former SBInet program that have proven successful, such as stationary radar and infrared and optical sensor towers," Napolitano said.

Video: 'Our house is on fire,' says black HIV/AIDS activist

Video: 'I did nothing,' Elton John says of early AIDS fight

Playing Politics with the Tucson Tragedy: Join the Live Chat

Since the shootings in Tuscon last weekend, there's been hand-wringing on all sides about toning down the rhetoric. But has there really been any change in the blame game, the finger-pointing? We're Keeping Them Honest. Plus, new insight on what Jared Loughner did in the hours before the shootings. Randi Kaye will retrace his steps. 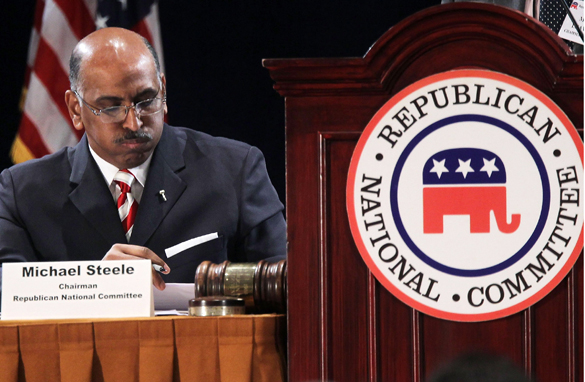 Viewer
Nancy Shapiro, New Jersey
“Michael Steele sighing at the illegible notes in his sweaty palm, wondering why he listened to Sarah Palin in the first place.”

Police: Loughner up all night at Walmarts, Circle Ks before shooting

Tucson, Arizona (CNN) - Jared Lee Loughner was up all night before gunning down 19 people - six fatally - outside an Arizona supermarket, taking several trips to the supermarket's shopping plaza in between checking in at an area hotel and visiting two Walmarts to buy ammunition, according to a timeline released Friday by the Pima County Sheriff's Office.

Loughner, 22, got a room at a nearby Motel 6, but did not spend much time there late the night of January 7 and early January 8, the Sheriff's Office timeline indicates.

At 11:35 p.m., he dropped off a roll of 35 mm film at a Walgreens next door to the Safeway supermarket where the shooting occurred.

After buying something about an hour later at a nearby Circle K convenience store and checking into the Motel 6 one mile to the west on Ina Road, he returned at 2:19 a.m. to pick up the photos and make other purchases.

Fifteen minutes later, he stopped at a Chevron gas station where, according to a source with direct knowledge, he bought a doughnut, a soft drink and several energy bars. Surveillance video captured Loughner making the purchases, and he also used the pay phone at the store, according to the source.

Then, at 4:12 a.m., Loughner posted a photo of the Walgreens on his MySpace page, with a caption "Goodbye friends."

Giffords is one of four victims of last Saturday's massacre still hospitalized at the center, according to Dr. Peter Rhee, the hospital's medical director for trauma. The other three patients are now in good condition, he said.

"We're confident (Giffords) is making progress now," said Dr. Michael Lemole, the hospital's chief of neurosurgery. She is "beginning to carry out a more complex sequence" of activity.

She is making "all the right moves," he noted. "We couldn't have hoped for anything better given the severity of (her) injury."