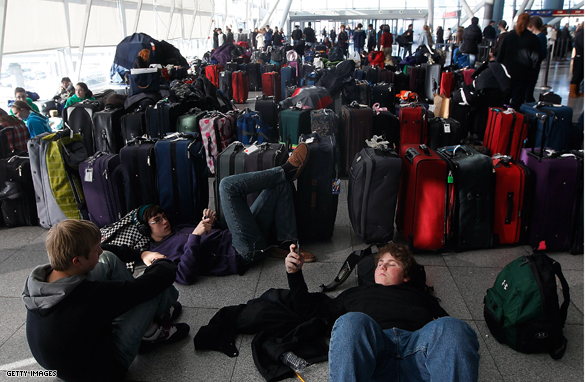 Young travelers rest near dozens of suitcases while stranded at Terminal 4 following a major blizzard at John F. Kennedy International Airport December 27, 2010 in the Queens borough of New York City. A massive snowstorm crippled much of the Northeastern United States leaving up to a foot of snow for New York City and New England and left millions of holiday travelers stuck at airports and train stations around the eastern seaboard. (Photo by Chris Hondros/Getty Images).

Staff
Steve Brusk
“The rest of Ms. Jolie's luggage will be along in a minute..."

Viewer
Janine from PA
"The baggage fee is too damn high convention."