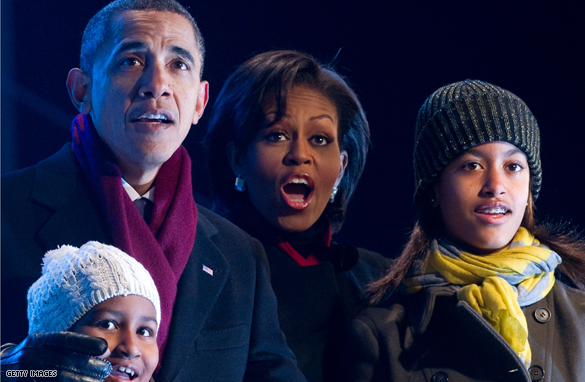 US President Barack Obama, joined by his family including First Lady Michelle Obama, and daughters Sasha and Malia, react as they push a button to light the National Christmas Tree during a ceremony on the Ellipse near the White House in Washington, DC, December 9, 2010. (Photo credit should read SAUL LOEB/AFP/Getty Images)

Staff
Steve Brusk
"Kids, cover your ears. That's the last time Biden gets to speak before the tree lighting."

Viewer
Steven – New Orleans, LA
"The Obamas look on in horror as Hillary Clinton does an interpretive dance to her favorite holiday jingle."