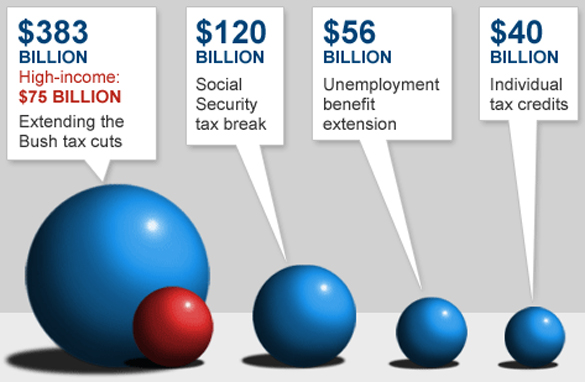 FROM CNN MONEY: There is no official cost estimate for the compromise proposal. These numbers are ballpark estimates based on analysis of similar proposals.

The compromise on the Bush tax cuts announced Monday night between President Obama and Republicans could cost between $700 billion and $800 billion if ultimately signed into law as is - no sure thing given opposition from many Democrats.

About half of the measures in the announced package might be considered new short-term stimulus, meaning they may add to the deficits for two more years, but could help maintain the economic recovery and help spur economic activity and job creation.

Of course, there is some disagreement over just how stimulative some of the measures will be.

Many economists, for instance, don't consider an extension of the Bush tax cuts stimulus, because it merely keeps current rates in place. But letting taxes go higher, they say, could impede growth.

Several other measures announced Monday do count as stimulus, including a break on how much is deducted from workers' paychecks for Social Security and tax incentives that could encourage businesses to step up their investment.

Deficit hawks have been saying that a short-term run-up in debt is acceptable if it is paired with a serious long-term deficit-reduction plan.