Send us your New Year's well wishes for family and friends. We might put some of them on air.

And let us know what you're doing to ring in 2011. You could see your New Year's Eve plans on air as well.

CNN's Jim Spellman shows us the roof view of Times Square and talks to the crowd.

CNN's Jim Spellman gives you a look at the 2011 props that people in the Times Square crowd are wearing.

Times Square: Life in the Pen

[cnn-photo-caption image=http://i2.cdn.turner.com/cnn/2010/images/12/31/art.chavezromero.jpg caption="Victoria Chavez and Manuel Romero have come from New Mexico to New York City to experience the arrival of 2011 in Times Square."]
Jim Spellman
CNN All Platform Journalist

Times Square, New York (CNN) - Arriving early for the New Year’s Eve celebration in Times Square is not for the faint at heart. Those who dare show in the morning will doubtlessly have fun but once they enter the fenced-in viewing areas what they won’t have is any way to keep warm, anything to eat and, perhaps, worst of all, no bathrooms.

“My feet hurt, my toes hurt, I’m hungry and I need to use the bathroom” says Victoria Chavez.

She came all the way to New York from Albuquerque, New Mexico with her boyfriend Manuel Romero who shares Victoria’s complaints as they await the arrival of midnight.

They still have five hours to go before the ball drops, but they don’t regret coming.

“How many people get to come to the biggest party in the world?” Romero says, “It’s well worth it, the chance of a lifetime”

Chavez has been passing the time on Facebook, posting pictures and status updates.

“Been here hours n counting! no restroom food chairs... just the crowds and the coldness!!,” she posted in the early evening.

Some of her online friends are dubious about their early arrival

“Dang girl that must suck dnt drink too much! Ur pics are so cool n exciting,” one of her Facebook friends posted.

But Chavez isn’t worried. “We’re sharing the moment with them, good and bad. We’re going with the flow,” she said.
END_OF_DOCUMENT_TOKEN_TO_BE_REPLACED

Video: Behind the Scenes – New Year's Eve on CNN 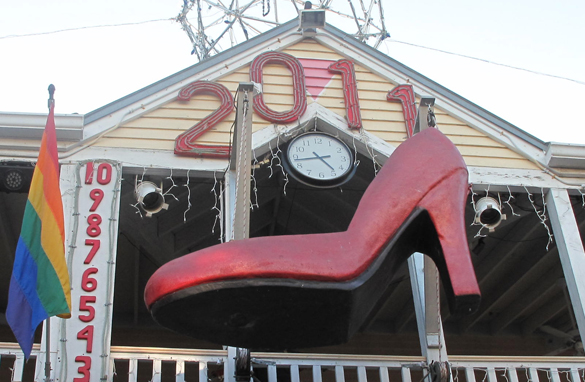 Video: Cooper and Griffin together again

Times Square, New York (CNN) - The crowd in Times Square is peaceful and the whole event is extremely well organized, but New York City in the post 9-11 world can still be a tense place.

Around 3:30 in the afternoon police spot a man in the crowd wearing a backpack and pull him from the crowd. Backpacks are not allowed in the crowd, but somehow he got past the screening and was standing about 20 yards from the stage.

The man had a long beard and was wearing kaffiyeh, the scarf often worn in Middle Eastern countries.

In a minute or less, a dozen NYPD officers surrounded the man and searched his backpack. Police radios crackled and the crowds craned their necks for a peep.

"Is he a terrorist?," one person in the crowd whispered.

His backpack holds a sweatshirt and some books. A sigh of relief goes through the crowd as the police give him back his backpack and escort him outside the security perimeter.

The crowd goes back to laughing and partying, but despite the good cheer evident in the crowd, it's hard to forget that we'll face many of the same issues in 2011 that we have in 2010.