Imam of NYC Mosque Near Ground Zero Speaks Out: Join the Live Chat

Tonight, you'll hear from Imam Feisal Abdul Rauf, the man behind the controversial NYC Islamic Center near the former site of the World Trade Center.  He talks about why he thinks the plan should go forward and more.

The imam at the center of the controversial proposed Islamic community center and mosque near Ground Zero is speaking out to CNN. Feisal Abdul Rauf is talking right now to CNN's Soledad O'Brien on Larry King Live.

Rauf said he's surprised by the uproar. He says no one objected to the plan when it was first written about in the New York Times in December 2009. Rauf said it didn't erupt until May when politicians started talking about it.

"When you politicize religion it is dangerous," Rauf told Soledad O'Brien.

"Our national security hinges on how we handle this," Rauf warned. He told Soledad he has no plans to move the project to another location right now.  "If we moved from that location, the story will be that the radicals have taken over the discourse," Imam Rauf told CNN's "Larry King Live.  "The headlines in the Muslim world will be that Islam is under attack."

We'll cover all the angles on Imam Rauf's comments with our panel, including CNN's Fareed Zakaria, David Gergen and Rosaleen Tallon, who lost her firefighter brother on 9/11. 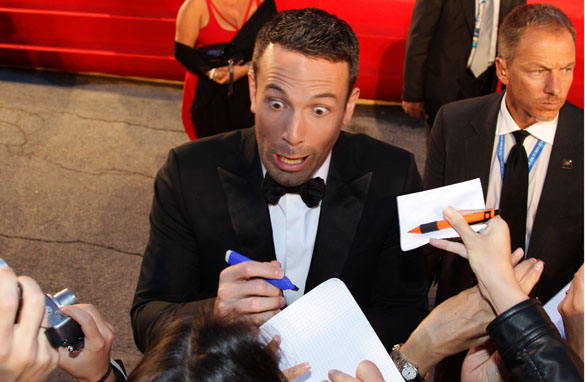 Staff
Ben Finley
"As Ben Affleck walks the red carpet, a fan reminds him of his work in 'Gigli'”

Jolie: No choice but to be optimistic in Pakistan

Islamabad, Pakistan (CNN) - Amid the overwhelming flood disaster in Pakistan, the world has "no choice but to be optimistic and to have hope" that things can improve there, actress and humanitarian Angelina Jolie told CNN Wednesday.

Jolie is in the country as the personal envoy of United Nations High Commissioner for Refugees Antonio Guterres. She spoke to CNN from Islamabad after touring flood-hit areas of Pakistan, including the northwest Khyber Pakhtunkhwa region.

Imam: We are proceeding with NYC Islamic center

New York (CNN) - The imam at the center of an ugly controversy over an Islamic center near New York's ground zero broke his silence Tuesday, just hours after a broad coalition of Christian, Jewish and Islamic leaders denounced what they described as a rising tide of anti-Muslim bigotry across the United States.

"I have been struck by how the controversy has riveted the attention of Americans, as well as nearly everyone I met in my travels," said Imam Feisal Abdul Rauf in an editorial published online by The New York Times Tuesday night.

"We have all been awed by how inflamed and emotional the issue of the proposed community center has become," wrote Rauf, who has just returned from a State Department-sponsored Middle East trip to promote U.S.-Muslim relations.

"The level of attention reflects the degree to which people care about the very American values under debate: recognition of the rights of others, tolerance and freedom of worship."

The imam was clear about his intentions.

I’m sitting at my computer watching a woman in Arizona shuffling through an array of firearms and emptying clip after clip into the desert. Terrorist? No. Tactical forces specialist? No. Republican candidate for Congress? Bet your sweet Beretta she is. And she’s not the only one packing iron as we head into this hell for leather midterm election.

We’ll get back to the would-be Laura Croft of Capitol Hill in a minute.

As much as the political crowd here in DC wails and gnashes George Washington’s wooden teeth over the idea that big money is corrupting our elections, when the votes are flying the big bucks are too, on both sides of the aisle. This midterm is no exception. Already spending in the ad chase is on track to break all the records. As a result, in Congressional districts coast to coast voters (meaning, uh…you) are being pounded with a wild array of commercials as everyone elbows for some attention.
END_OF_DOCUMENT_TOKEN_TO_BE_REPLACED

Related: We are proceeding with NYC Islamic center, imam says

(CNN) - Faulty cementing, a misread pressure test and an improperly maintained blowout preventer all contributed to the April 20 explosion that uncorked the worst oil spill in U.S. history, BP's investigation of the disaster concluded Wednesday.

BP said its team aboard the doomed oil rig Deepwater Horizon "incorrectly accepted" results of a negative pressure test aboard the rig before the blast, but the company's internal report assigns much of the blame to rig owner Transocean and cementing contractor Halliburton. The three companies have repeatedly pointed fingers at each other since the explosion, which killed 11 workers and resulted in an estimated 4.9 million barrels (205 million gallons) of oil spilling into the Gulf.