Video: Where is the mosque money coming from?

[cnn-photo-caption image=http://i2.cdn.turner.com/cnn/2010/POLITICS/08/18/obama.islamic.center/smlvid.obama.ohio.afp.gi.jpg caption="Foreman: Mr. President, your side has not framed the issues of this election nor put your efforts into the best light. At least not yet" width=300 height=169]

Reporter's Note: The infamous mid term elections are coming in a couple of months, and everyone is DC is wagering on the outcome. Maybe no one more than President Obama, who could find his political future a whole lot fuzzier if his team can’t focus on some critical wins.

Beautiful light is easy to understand. Why do you think candlelight dinners are so popular? Because we all look a little better in a golden glow that does not expose too many of our flaws. The converse, of course, is those convenience store restrooms with lights that would make Jennifer Aniston look like Charles Manson.

Composition? Non-photographers have trouble with this, but basically I’m talking about how elements (uh, things) are laid out in the frame. You notice composition most when it is bad; when Aunt Sally’s face is barely poking into the bottom of the picture and the shingles on the roof behind her are looming through three-quarters of the frame like some weird symbolism from a Bergman film. Good composition is invisible. Everything is balanced; what should stand out does so, and what should retreat into the background (like Biden, ha!) does that too. The picture just looks like a picture.

I say all of that so that I can say this: Right now, with the fall elections closing in fast, the picture of you and your party is poorly composed and suffering from lousy lighting.

Is there a unified message from you and Congressional Dems? Oh sure, there’s the “we’re not Republicans” chorus, but I mean beyond that. It’s not at all clear whether you are running on your economic moves, your handling of the wars, your efforts to contain Wall Street or the housing crisis or health care costs. And if you are running on any or all of those, what precisely is your message?

Your side has not framed the issues of this election nor put your efforts into the best light. At least not yet. I’ll grant you that the Republicans aren’t doing much better, but right now they don’t have to. When voters are in the mood to punish the status quo (which is, btw, how you were elected) the party with more power suffers the greater damage.

So my advice to you (which interestingly would be the same to a Republican administration) is to put a piece of paper in front of you and compose the picture of this election as you would want it: What subject do you want front and center, and what kind of light will you cast upon it? What other subjects will you place around it, and how do you want them to look?

Unless you can see a clear image in your head of the plain reasons people should vote for your side, it is absurd to imagine voters will come up with it on their own. And without that picture, I suspect you’ll find yourself in an even worse light after November has passed.

I’m actually a pretty good photographer, if I do say so myself. So give me a call if you need a new passport photo or something for your Facebook page. Or if you just want to see what develops. Ha!

The last U.S. brigade combat team in Iraq has left the country, a move that helps U.S. President Barack Obama reach his goal of 50,000 troops in the country by September 1.

Their departure leaves about 56,000 U.S. troops in the country, according to the U.S. military.

Capt. Christopher Ophardt, spokesman for the 4th Stryker Brigade, 2nd Infantry Division, said the last of the 4,000 members of the unit crossed the border into Kuwait early Thursday.

A few hundred members stayed behind to finish administrative and logistical duties but will fly out of Baghdad later Thursday, Ophardt said. 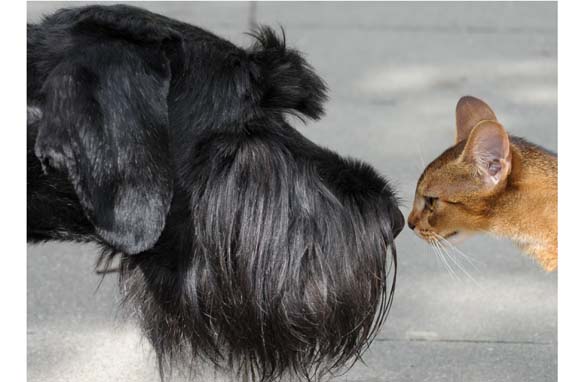 A Giant Schnauzer and a cat check each other out in the eastern German city of Leipzig on August 18, 2010. (Photo credit should read PETER ENDIG/AFP/Getty Images)

Staff:
Ben Finley:
"You had me at Meow"

Viewer:
Linda from New York
"Hey! You look like that Blagojevich guy."