The House I Live In

Earlier this month I wrote about ill will in several parts of the country toward planned construction of mosques.  I had not figured on writing anything more related to this subject until I heard a recording of Frank Sinatra singing "The House I Live In" while driving to work.

"The House I Live In" is a departure from the better-known swinging tunes and torch song repertoire of the crooner sometimes referred to as the "The Voice." The song was the centerpiece of a 10-minute, black-and-white film of the same name released in 1945 to combat racism and anti-Semitism in the aftermath of World War II. Here Sinatra teaches a group of boys a lesson in religious tolerance. The lyrics were penned by Abel Meeropol, under the pen name Lewis Allen. (The name Meeropol became better known when he adopted Michael and Robert, the sons orphaned by the 1953 executions of Julius and Ethel Rosenberg, who were convicted on espionage-related charges involving atomic bomb secrets.) The music was written by Earl Robinson, who later was 'blacklisted' during the anti-Communist fever of the early 1950s.

END_OF_DOCUMENT_TOKEN_TO_BE_REPLACED

Reporter's Note: President Obama is going to the Gulf of Mexico this weekend.  I wish I were.  Instead, I’m writing another letter to the White House and dreaming of distant, grilled amberjack.  Mmmm.

Go into the water!  I’m begging you, dash into the waves!  During your trip to the Gulf, take the kids by their hands, call out to Michelle, and run into the tide with happy smiles.  Maybe take a Frisbee along and play a little catch.  Heck, if the dog is with you, call him into the surf, too.  Only don’t let him into the car afterward.  If the sand doesn’t get into the upholstery, the wet dog smell will. 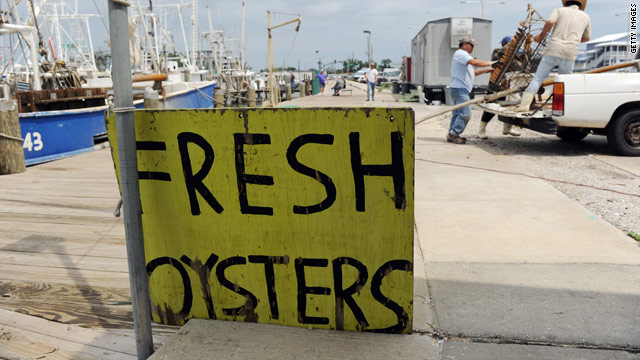 I’ve written before about the symbolic power of Presidents, and as you know I think there are times when it is at least as punchy as the real power.  This is a prime opportunity to wave that flag for the good of millions of folks who live in that area (many of whom, I may point out, were none to happy with your response to the oil spill in the first place.)  If people see you playing in the water and having a good time, they’ll think, “Hey, he’s the president.  He’s surrounded by Secret Service Agents, advisors, doctors, he may even have a private podiatrist; he has legions of folks assigned to keeping him safe and healthy.  So if he’s in the water, then…”

When you are finished swimming, how about coming ashore and building a sand castle?  Then the finale: Go to a local restaurant, order up a big platter of Gulf seafood, and consume every morsel, exclaiming the whole time, “Wow!  This is the best I’ve ever had.  I’ll be coming back for more!”