Stopping flow of conflict minerals from Congo to your cell phone

Editor's note: The opinions expressed in this blog are solely those of Sasha Lezhnev and John Prendergast. Sasha Lezhnev is Executive Director of the Grassroots Reconciliation Group, a nonprofit that aids former child soldiers. John Prendergast is co-founder of Enough, the anti-genocide project at the Center for American Progress and co-author with Don Cheadle of the forthcoming book, "The Enough Moment." 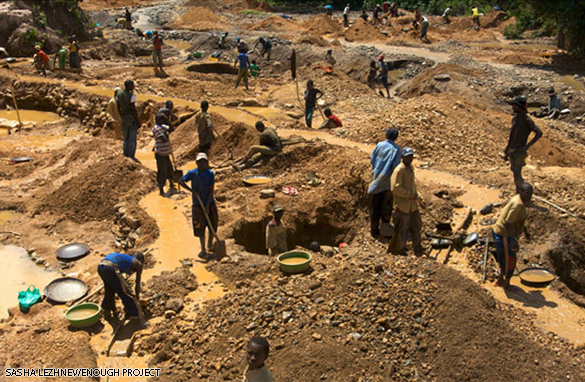 Minerals mined in the Eastern Democratic Republic of Congo often fuel the financial power of military groups jockeying for control over the country's civilians.

At a time when partisan politics are bitter, midterm election races are tight and almost every legislative effort is stalled, who would you expect to take the boldest step in years to address the deadliest war in the world, in the heart of Central Africa?

Quietly, over the past four presidential administrations, a powerful and deep bipartisan consensus has developed in Congress in support of a stronger U.S. policy toward Africa. The latest manifestation of this cooperation is a small but potent provision addressing Congo's "conflict minerals," folded into the recently passed Wall Street reform bill.

The trade in four conflict minerals - tin, tantalum, tungsten (the 3Ts), as well as gold - fuels the war in eastern Congo today. It's been the deadliest war in the world since World War II.

We regularly travel to eastern Congo, and on our last trip, we traced the minerals from the mines.

At the mines, we saw militiamen armed with AK-47 machine guns standing over miners and forcing them to work and pay bribes, including child miners as young as 11. We then crossed through army and rebel checkpoints, where smugglers paid off the commanders in U.S. dollars, and then witnessed how these same minerals were packed into barrels with Congolese flags on them and loaded onto planes and flown out of the country.

We've seen how armed groups on all sides of the conflict are reaping hundreds of millions of dollars per year by controlling mines and trading routes, selling minerals to international traders and smelters, which in turn sell them to electronics and jewelry companies.

By requiring that publicly listed manufacturers who use these minerals conduct independent audits of their supply chains, this legislation will help curb the conflict minerals trade.