Parts of an Arizona immigration law take effect Thursday after a federal judge blocked several of its most controversial aspects.

The preliminary injunction, issued Wednesday, means that, at least for now, police are prevented from questioning people's immigration status if there is reason to believe they are in the country illegally.

U.S. District Judge Susan Bolton also blocked provisions of the law making it a crime for people to fail to apply for or carry alien registration papers or "for an unauthorized alien to solicit, apply for, or perform work," as well as a provision "authorizing the warrant-less arrest of a person" if there is reason to believe that person might be subject to deportation.

Video: Essence under fire for hire

Video: Immigrant laborer for a day

[cnn-photo-caption image=http://i.cdn.turner.com/cnn/interactive/2010/05/us/gallery.large.oil.spill/images/298.jpg caption="If the oil has truly, really, honestly, incontrovertibly, unimpeachably, reliably, verifiably been stopped, or even if it will be in the very near future, I’ll assure you that I will be one happy boy. " width=300 height=169]

Reporter's Note: I have read a fair number of quote books in my time, and have noticed a lot of things being quoted that frankly aren’t so quotable. That said, I’d like to be included in one, but so far all I can come up with is, “Hmm… looks like rain.” That, and a few hundred letters to the president.

If the oil has truly, really, honestly, incontrovertibly, unimpeachably, reliably, verifiably been stopped, or even if it will be in the very near future, I’ll assure you that I will be one happy boy. It seems like we’ve been watching those pictures of bubbling crude longer than Jed Clampett, and frankly as TV goes, it’s more depressing than CSPAN, and that’s saying something. So here’s hoping.

In my continuing series this week of quotes that have inspired me, today I have a strange one. Maybe even a little unsettling. It’s from the movie The Pope of Greenwich Village. There is this scene in which this guy is about to have his thumb cut off by gangsters and he asks advice from a pal about what he should do. And this is the response, at least as IMDB has it…

Nothing hurts as much as you think it will. You go numb... then you wrap your belt around your wrist and get to the nearest hospital.

I realize this is a shade on the macabre side, but I truly do think of that scene fairly often. When things don’t go as we plan (which, let’s face it, is pretty much all the time,) and especially when they take a dreadful turn, (honestly, I had no idea that Silly String could be flammable,) it’s good to take a moment and remind ourselves that it could be worse.

I’ve often told my children that even on their worst day, when everything seems to be falling down around them they should offer a prayer of thanks for all the goodness in their lives, the luck of their birth into a great free nation and a loving family, and the native intelligence and skill with which they have been blessed. (Oh, and I also have another thing I say whenever they get hurt which seems to lighten the load, “Hey now, don’t cry. It could have been worse. It could have happened to me!”)

In a few short words, this line from that movie offers a world of wisdom for my money. First, don’t take a hit too hard. Second, take immediate action to stop the damage. And third, move as quickly as possible to make permanent repairs.

If nothing else, such a philosophy keeps us from dwelling on our bad luck, and usually I find that’s the first step to making better luck come my way.

Hope all is well. More tomorrow.

The man overseeing the federal response to the Gulf oil disaster will meet New Orleans parish presidents Thursday to outline the plans after the well is permanently sealed.

"The relief well, while it is deep, is something that has been done before," Allen said. "The technologies involved here are not novel, but obviously, the depth is a challenge here. But we are optimistic we will get this done." 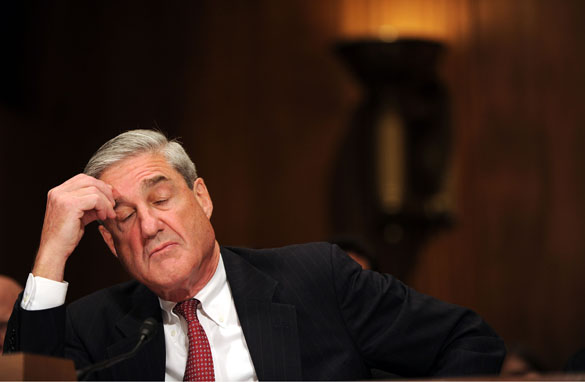 Staff:
Gabriel Falcon
"Federal Bureau of… wait, don’t tell me, I know this."