A weather system moving over the southern Bahamas has been upgraded to a tropical storm, with sustained winds now reported at 40 miles an hour, as it heads toward the southern tip of Florida and the Gulf of Mexico.

The system has been named Tropical Storm Bonnie. At 8 p.m. ET, it was moving northwest at 14 miles an hour over the central Bahamas, according to the National Hurricane Center.

It could pick up strength as it moves over the long stretch of open water in the Gulf of Mexico, but the latest computer models do not show it becoming a hurricane, according to CNN meteorologist Chad Myers.

Forecasters warn Tropical Storm Bonnie is headed for the Gulf. We have the breaking developments on what this means for the BP oil disaster. Plus, Shirley Sherrod gets an apology from Pres. Obama.

Tropical Storm Bonnie formed near the Bahamas Thursday morning and could threaten operations to contain the oil spill in the Gulf of Mexico this weekend. Retired Coast Guard Admiral Thad Allen speculates that if the storm makes a direct hit, it could disrupt operations for 10 to 14 days. Chad Myers delivers the full forecast tonight. But what questions do you have?

Sherrod speaks to President Obama in a telephone call

(CNN) - President Barack Obama spoke Thursday with Shirley Sherrod, the former Agriculture Department employee who was forced to resign from her job based on incomplete and misleading reports about a speech she gave in March.

Sherrod received a text message telling her Obama had been trying to reach her since Wednesday night, said Julie O'Neill, a CNN Special Investigations Unit producer who was with her at the time. Sherrod called the White House and was asked to call back in 10 minutes, at which time she spoke to the president.

Sherrod was "very, very pleased with the conversation," O'Neill said, and told her Obama had said Agriculture Secretary Tom Vilsack was "very apologetic and very sincere." Vilsack apologized to Sherrod on Wednesday and offered her a different position within the department.

(CNN) - The eruption of new controversy over the release last August of a Libyan man convicted in the Pan Am Flight 103 bombing over Lockerbie, Scotland, is a "media firestorm" that threatens to distract Washington from more pressing issues, says analyst Fareed Zakaria.

Controversy over the move cast a shadow over British Prime Minister David Cameron's visit this week and was a topic at the press conference Cameron and President Obama held.

Zakaria told CNN there are still legitimate questions to be explored on the release of Abdelbaset Ali Mohmed al Megrahi, including the role of BP in lobbying the British government for the resolution of issues with Libya. 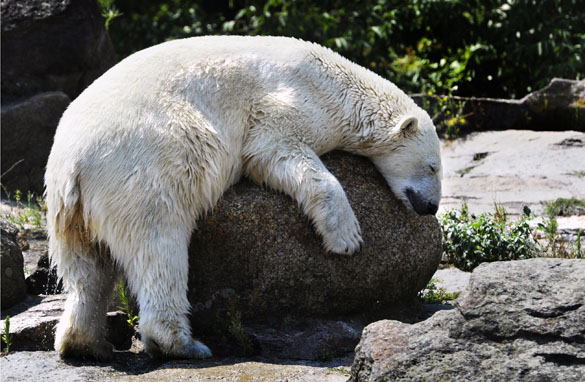 A polar bear dries off in the sun after coming out of the water in his enclosure at Berlin's zoological garden zoo on July 22, 2010. AFP PHOTO / ODD ANDERSEN (Photo credit should read ODD ANDERSEN/AFP/Getty Images)

Confidence is high as tropical storm heads toward Gulf

New Orleans, Louisiana (CNN) - Retired Coast Guard Adm. Thad Allen said Thursday a cap placed over the damaged well in the Gulf of Mexico will remain sealed even if a tropical storm forces vessels monitoring the area to evacuate. A sealed cap means no oil is escaping.

Allen, who is leading the federal response to the spill, said sensors and extensive monitoring have allowed observers to "rule out any indications there might be a leak." His confidence in the integrity of the well "improved dramatically" within the past few days after he examined data, he said.

BP is also weighing a tactic called "static kill" that could help seal the broken well. The process involves pumping mud into the well to force oil back into the reservoir below. BP could begin a "static kill" as early as the weekend, weather permitting.

A confidential report on safety conditions aboard the Deepwater Horizon oil rig, conducted about one month before the rig's explosion, points to widespread fear of reprisal for reporting employee mistakes that could undermine safety aboard the rig.

"There was a stated fear of reprisal related specifically to the reporting of dropped objects," states an executive summary of the report obtained by CNN.

"Only 46.3 percent of participants felt that, if their actions led to a potentially risky situation (e.g., forgetting to do something, damaging equipment, dropping an object from height), they could report it without any fear of reprisal," the report states.