Jimmy Buffett was out walking on the beach in Gulf Shores, Alabama when we arrived for the interview.

"This is the beach of my misspent youth," he said, as we began to stroll along the water's edge.

A few kids played in the water, but the rough surf created by Hurricane Alex kept them from swimming. A thin line of tar balls had been left on the beach by the morning tide.

"You're not human if anger isn't the first emotion," says Buffett, who has long been involved in environmental causes.
[cnn-photo-caption image=http://i2.cdn.turner.com/cnn/2010/images/07/01/art.jimmybuffet2.jpg]

Buffett's benefit concert in Gulf Shores, Alabama has been postponed until July 11, but he came here anyway and played at his sister's restaurant last night. He's trying to encourage people to come visit the Gulf.

"Can Margaritaville survive an oil slick?" I ask. "Sure, hell, we'll survive," he says quickly, "people on this coast can survive anything. I mean, it's another storm, it happens to be one we're not quite used to in terms of what it's leaving behind, but you know, this is hurricane country and people bounce back, and I love the resilience of people."

Buffett himself has just opened up a hotel in Pensacola Beach, not great timing he admits, but he is not surprised this spill has lasted so long. He says he didn't believe the early estimates put out by BP about the oil flow.

"You know what," he says,"I've been in show business a long time, I know liars when I hear them. I thought they were lying from the beginning. That's just me personally."

More of my conversation tonight on 360° live from the Gulf. 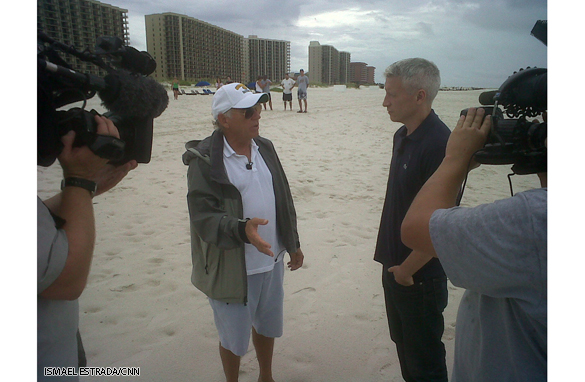