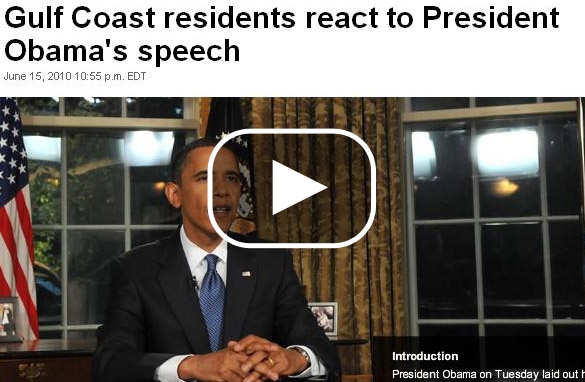 President Obama on Tuesday laid out his plan to help the Gulf Coast recover from the largest environmental disaster in U.S. history and called for a new policy for cleaner energy. Here's how Gulf Coast residents responded to the president's address.

"We don't know how bad it is yet, but we have received reports that 200 houses on the coast line were damaged and 227 others were in town," according to Papua police spokesman Wachyono, who goes by a single name. The national disaster coordinating agency will be sending a team to assess the situation, he said.

Aid flows in for those fleeing Kyrgyzstan violence

The U.N. cargo plane carrying about 800 lightweight tents will add to a growing effort to try and aid the estimated 100,000 people who have fled fighting in Kyrgyzstan to refugee camps in Uzbekistan. Several countries, including the United States and Russia, have also sent aid.

The Central Asian nation's news agency 24.kg reported that the death toll had risen to 179, a number that some observers discounted as low.

[cnn-photo-caption image=http://i.cdn.turner.com/cnn/2010/OPINION/06/16/rollins.obama.speech/t1larg.obama.speech.pool.jpg caption="President Obama spoke to the nation about the oil disaster from the Oval Office on Tuesday night." width=300 height=169]

Editor's note: Ed Rollins, a senior political contributor for CNN, is senior presidential fellow at the Kalikow Center for the Study of the American Presidency at Hofstra University. He is a principal with the Dilenschneider Group, a global public relations firm. He was White House political director for President Reagan and chairman of the National Republican Congressional Committee.

New York - President Obama has given a lot of speeches. He's given hundreds since he became president. He's given six in the last two days on his trip to the Gulf.

But last night's was the first speech he has given from the Oval Office. It will not be his last. But it was important, and he gave it well. It took him five paragraphs to say the serious words we have all known for weeks, but he needed to say: "This oil spill is the worst environmental disaster America has ever faced."

He went on to say what every American and every victim of this disaster wanted to hear: "We will fight this spill with everything we've got for as long it takes. We will make BP pay for the damage their company has caused. And we will do whatever's necessary to help the Gulf Coast and its people recover from this tragedy."

The rest of the speech didn't matter nearly as much. There were other things he wanted to say, and some of them were important. But the reality is that those 44 words quoted above are action items: We will fight with everything; we will make BP pay; and we will help our citizens recover. Now the president has to make it happen. As our nation's leader, he made commitments and they must be kept.

Video: Trying to save the birds

Reporter's Note: President Obama spoke to the nation from the Oval Office about the BP spill, saying he’ll hold the oil giant accountable. Of course, I say about once a week that I’m going to give up on writing these letters, and look where that’s gotten us! Let’s hope his plan goes better.

71 percent of the citizens of this country say you are being too soft on BP, and I’m not sure you changed any minds with your big Oval Office speech. I hate to say it, and I’m sure you hate to hear it, but there you have it.

While you said you will instruct BP to pay for the damage, I think you failed to make two things clear:

1) What precisely do you consider to be the damage that BP has caused? This is potentially no small bone of contention. Here is one view: Anyone who lost even a dollar of income today, tomorrow, or thirty years down the line as a result of this spill… directly or indirectly… deserves compensation. For example, say a farmer sells okra to a seafood restaurant in Galliano, Louisiana, and suddenly that restaurant goes under because of the BP spill. Under this scenario, that farmer deserves payment for the destruction of his market, because after all, he didn’t spoil the Gulf, did he? On the other hand, BP seems intent on saying only direct loss will be compensated; i.e. the restaurant might be covered, but the farmer won’t. So your failure to make it clear where you stand on this leaves a huge question mark hanging in the air like a clump of Spanish moss on a Live Oak.

END_OF_DOCUMENT_TOKEN_TO_BE_REPLACED

President Obama will have his showdown with BP top executives Wednesday and said he will tell the company it must pick up the tab for the massive oil disaster in the Gulf.

Obama vowed Tuesday to unleash whatever resources may be needed to fight the oil spill in the Gulf of Mexico and to keep the pressure on BP.

"We will fight this spill with everything we've got for as long it takes," Obama said after two consecutive days surveying the Gulf Coast, which is threatened by a massive oil spill that began April 20.

In a prime-time speech from the Oval Office, the president predicted that "in the coming days and weeks," efforts to contain the leak "should capture up to 90 percent of the oil leaking out of the well."