What would it take to become a three-party nation? 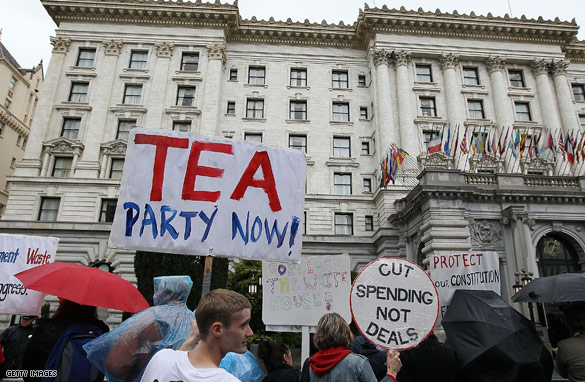 American politics hasn't always been dominated by the Democratic and Republican parties.

The Democratic Party didn't arrive on the scene until 1828 and it took until 1854 for the early "modern" Republican party to enter the game.

Strangely enough, from 1792 to 1824, there was actually a "Democratic-Republican Party". That would almost be like having Nancy Pelosi and John Boehner on the same side. It boggles the mind.

Although Democrats and Republicans have been around for a long time, we've also had other major parties - including Federalists, Whigs, and even Teddy Roosevelt's Bull Moose party.

And now we have the Tea Party and/or the Conservative Party.

What are the chances that the Tea Partiers or Conservatives will form a viable third party? And if they did, where would they get their strength from? And who would they hurt?

Who would they hurt?

Let's take these questions in reverse order. Who would be hurt if the Tea Party or Conservatives became a viable, recognized party?

This is an easy question with an easy answer: Republicans.

While conventional wisdom has it that the 2010 mid-term elections are the Democrats' to lose, the reality is that a loss will be much more catastrophically damaging to the Republicans.

Even if the Democrats lose in November, they'll still have the White House for two more years. But if the Republicans lose, they won't even have their good name.

This shows an astonishing drop in fund raising to one-third of what it was by this time in previous election cycles. That's like being a third of the way over the ocean, flying from London to New York and being told the plane's out of gas. For Republicans, and especially Republican candidates, it's scary bad.

According to OpenSecrets.org - a nonpartisan, nonprofit that tracks congressional funding - money wins elections: "The candidate with the most money going into Election Day emerged victorious in nearly every contest."

For the Republicans to be wheezing along at such low comparative levels doesn't bode well for them going into November.

If the Republicans don't win - and don't win strong - the beneficiaries will undoubtedly be the Tea Party and/or Conservative party.

Where would they get their strength from?

But anger alone, whether justified or not, does not make a political campaign. That requires funding, logistics, experience, teamwork, and all manner of deal-making not driven merely by emotional intensity.

Mostly, though, the Tea Party (or it's cousin, the Conservative-but-not-Republican Party) will get its power from the vacuum created if the Republicans fail in November.

If the Republicans can't show they can pull off a strong victory, they'll lose a great deal of credibility. Into that credibility gap will stroll an alternative solution: a new party.

That's because the money is there, the infrastructure is there, the entire campaign-running industry is there. But if the Republicans lose in 2010, they'll lose the ability to convince their backers and supporters that they can "bring it" in 2012 - and all that political "juice" will go to the Tea Party and/or the Conservative Party.

Can the Tea Partiers or Conservatives form a viable third party?

This, then, is the next big question. If the Republicans lose their mojo, can an outside party pick up the ball?

To do so, a cohesive, organized party will need to emerge. The Tea Party arrived out of a lot of anger, mixed with opportunistic hype. Separately, the Conservatives are Republicans who felt that the current Republican Party isn't conservative enough.

These two groups might need to inter-marry, mix their DNA, and prove they have not just the stones to step up and govern, but the skills, resources, and maturity to pull it off. And it'd be good if they refrained from killing each while other doing it.

So there's your answer. If the Republicans blow chunks in a big way in November and if the Tea Party activists and/or the Conservatives can merge into a cohesive, organized, mature force, and then - and probably only then - we might have a viable third party.

No matter what, it'll be a heck of a show.